I recently posted about the family Bible owned by Philip Creasy and sent to me by Melissa. To recap what happened: Melissa had owned this Bible for several years & attempted to find a family related to Philip Creasy. She found & read my website, Our Leaves & Branches, where she saw Philip Creasy. Melissa contacted me & sent me this heirloom. 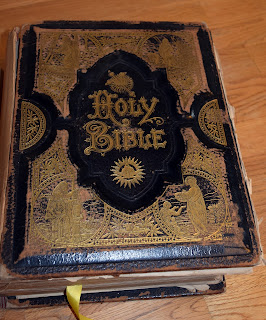 Philip M. Creasy, 1867 – 1934
is my half 2nd grand uncle. His father, Christian Gruissy, 1811 Switzerland – 1907 OH, is my 3rd great grandfather. Christian married twice, to Mary Grorisclauss, my 3rd great grandmother and to Mary Wise, mother of Philip M. Creasy. [Note that two of Christian’s sons, Reuben & Philip changed their surnames from Gruissy to Creasy.] Philip was a grocer. My paternal grandmother told me: One day a man came into his shop to look at a gun. He left and returned later. He looked at the gun again. He asked for as box of shells. He put a shell in the gun and shot Phillip; killing him. However, his obituary tells us Philip died of a stroke. He & his parents & other family members are buried in South Lawn Cemetery, Beach City, OH. 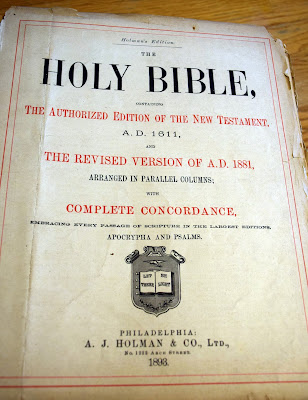 I was very excited and wondered what information the Bible would contain. I considered sleeping beside my mailbox, waiting for its delivery. In reality, I was in Illinois visiting our daughter when the package arrived. Home again, I tore open the box.

First reaction, this Bible is huge! Melissa had placed the Bible in a plastic bin& wrapped it in bubble wrap. The cover is 10 x 12 inches and four inches thick. 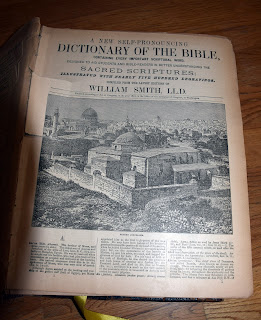 About the Bible: It was printed in 1893 in Philadelphia by A. J. Holman & Co. There is a wonderful color plate and many black and white illustrations. One page declares the Bible a “new self – pronouncing dictionary of the Bible, containing every important scriptural word”. The pages are yellowed and some are crumbling along the edges. I will purchase an archival safe box for its storage. 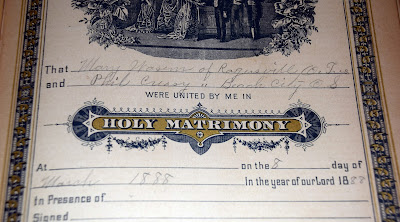 About the genealogical findings: Melissa kindly place a yellow ribbon in the center of the Bible, where family information was recorded. First there is a page for Holy Matrimony details. Mary Wasem of Ragurville, O, Tus. [Ragersville, Tuscarawas County, Ohio] and Phil Creasy of Beach City, O. S. [Stark County, Ohio] were married on the 8 day of March in the year of our Lord 1888. 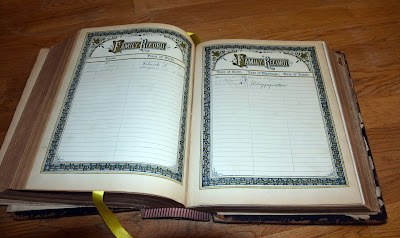 Then there is a two page spread for a ‘Family Record’. 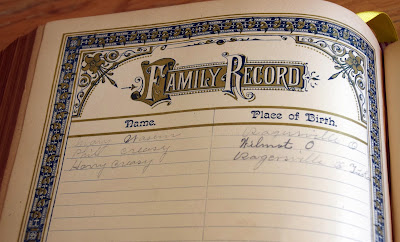 Interestingly, it looks like the birth years were erased and rewritten. The pencil is certainly darker than the original. I did know Phil’s birth date but had his birth year as 1867. I did not know Mary’s birth date or location. I had their son’s birth information but not his marriage date.

There are many more lines in the Bible but no other information. There are no other children listed and I had found none during my research. While Harry’s marriage date is shown his wife’s name is not included. Harry’s daughter is also not listed.

I wish there was more genealogical data included but I believe this Bible is still very special. Each year my husband & I host a big family cookout on Independence Day. I always set out family charts and evidences of my most recent research. This year this Bible will be centerpeiced along with a chart showing our relationship to Philip.

The best part is holding and turning the pages of this old Bible that Philip & Mary once held. I learned about Philip, researched his life & now I have the Bible he owned! 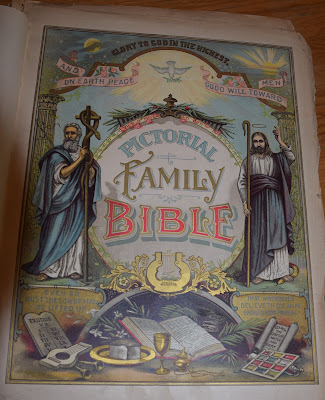 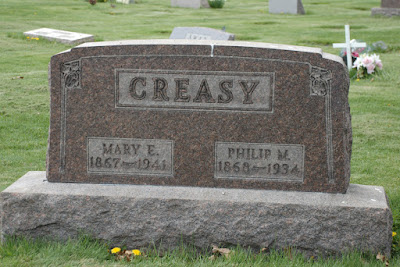 Posted by Colleen G. Brown Pasquale at 9:31 AM

Well darn it---wish there was a bit more info for you in the Bible, but nonetheless what a treasure and how awesome to know that they at one time held that bible in their hands too. Glad it is finally back with family.

This Bible is a true family heirloom and you are SO lucky to have it and be able to pass it down to future generations! The story about Philip is sad...wonder what the truth is?

It appears to be in great condition. I now have 2 family bibles from my Davis line but both look like they've been kicked around the block a couple times.

Michelle, I agree completely. Sometimes I get greedy for information, wishing there was more. However, the Bible itself is a treasure.

Marian, I wonder about the story of his death. Always love the colorful family stories but they can be difficult to verify.

Wendy, I am looking forward to showing this Bible to the rest of the family.

This is fantastic Colleen! What a treasure. And another benefit of writing a genealogy blog.

I want to let you know that your blog post is listed in today's Fab Finds post at http://janasgenealogyandfamilyhistory.blogspot.com/2016/05/follow-friday-fab-finds-for-may-13-2016.html

Have a great weekend!

What an amazing heirloom, Colleen, treasure it well.

This is an awesome family heirloom.I know that for many more years the Bible will be taken care of cherished.

How exciting! My aunt recently gave me what we all thought was my grandfather's bible, only to discover (after translations) that it was his brother's. His brother had been a brick wall since Mom called him Fritz and it turns out he called himself Fred after he immigrated to the U.S. I hope your new treasure is equally if not more help in breaking through any brick walls you may have.

Dara, thanks for stopping by. Yes it is quite an interesting book.

Thanks, Charlie! I want to tuck it safely into an archival box.

Schalene, sometimes the answers we are looking for are closer than we think.