This week's focus on Sepia Saturday is boats,a  lighthouse or the waterfront. This brought to mind the photographs I took in Cobh, Ireland, once called Queenstown, an important place in my family's history. 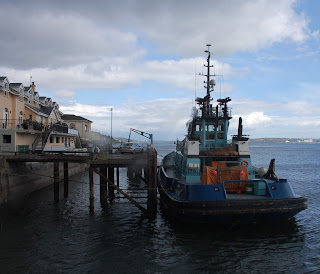 When my daughter & I visited Ireland I wanted to make a stop at Cobh because this was the spot where my ancestors had left their beautiful green homeland to head to the unknown land of America.

My great grandmother, Mary Josephine Mullane arrived in Cobh with her cousin, Mary Pollack. I can picture the young women standing tall on the dock and looking out to sea, attempting to see their new lives in New York City. It was May 1885. My 18 year old great grandmother, Mary Jo, was listed as a spinster on the ship's rolls. She stepped on board the S. S. Britannic, changing her life and the direction of our family. Mary Jo was to spend the rest of her life in New York City where she would marry & become the mother of seven children.

The man she would marry had left from this same port just a few days before her. Michael Coyle left Cobh on the Boat Servia in May 1885. He would live briefly in Connecticut and then become a baker in New York City.

They met, as the family story goes, on the staircase in a boarding house. When he looked up and saw Mary Jo walking down he decided she was the most beautiful woman he had ever seen and his heart was lost to her. They were married 9 November 1895 in Saint Brigid's Church, New York City. 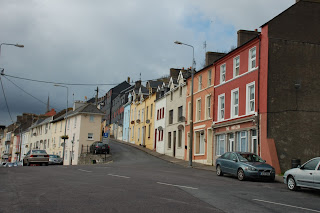 Be sure to visit Sepia Saturday for more photographs of boats! 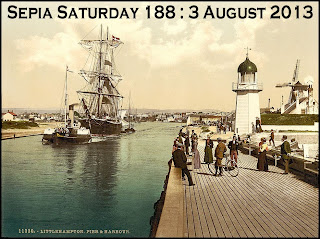 This is the second post this week to mention Cobh

Incidently your link on Sepia Saturday takes us to last week's post on Bibles.

Cobh again :) Love those colourful houses. They remind me of those in Youghal, Cork.

A magical place, Cobh. I've written abouti t myself in the past. It's haunted by the spirits of so many hopeful passengers. It must be more than ten years since we were there, but I'll never forget my visit.

You painted a perfect picture of that first meeting of Mary Jo and Michael.

A perfect photograph to follow this week's theme. My ancestors left from Liverpool when they tried their hands at settling in North America, but I imagine the view from the dock was much the same as at Cobh.

I enjoyed the lovely tale of your ancestors. Fine post.

Oh, and ye pulled me heartstrings with such an endearing love story! And the pictures were great too.

A fascinating personal story of Cobh which I also feature in my post this week. I saw it from a distance when returning from a year in the States in 1966, just before regular transatlantic shipping ceased. The signt of the harbour and knowing a little about its history has always stuck in my mind.

I have never been there, but your lovely photos and story make me want to visit it!

Bob, thanks for letting me know!

Thanks, Karen. I want to return one day.

Sue, it is funny that this week's Sepia Saturday made us both think of Cobh.

Thanks, Joan. It was not easy to take photos that day as the rain poured on my daughter & me and I did not want my camera to get drenched. ha

Thanks. I love stories like that, especially true ones!

The colors in Ireland are super. I also love the pastel houses & white roofs in Bermuda.

Nell, you are very right! Every passenger = a wonderful tale to be told!

Thanks, Charlie! They had seven children. The oldest was my maternal grandmother.

Such a cute story about how your great-grandparents met. (And that "spinster" thing always just kills me! -- Man, they didn't give a girl a chance to grow up first!!)

Wendy, you're right. We have an unmarried daughter & I like to tease her, saying she is a spinster.