Matrilineal Monday: 'The Sun in the heaven was shining gay, All things were joyful on that day' 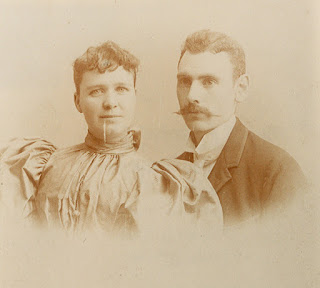 This is the second of two poems by great grandmother, Mary Josephine (Mullane) Coyle, 1867 – 1927, like to recite. Her youngest daughter, Kathleen G. Coyle, told me her mother would hold her on her lap and recite the poems. At 90 years of age Kathleen could still recite the poems herself.

I like some of the language in the poem such as the ‘joyaunce in their sound’ of the sea birds. I wonder if my great grandmother liked the language or if she liked the lesson in the poem. Sir Ralph steals the bell to annoy the Abbot but if he had left the bell in place it would have saved his life.


I have enjoyed poetry for much of my life and I wonder if that is something I inherited from Mary Jo. It is always comforting to find small links between ourselves and those who walked before us. 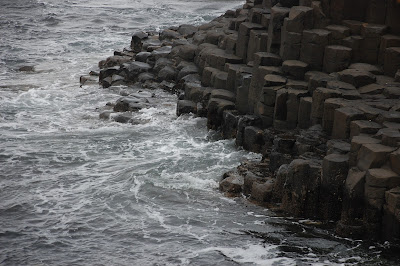 
No stir in the air, no stir in the sea,
The Ship was still as she could be;
Her sails from heaven received no motion,
Her keel was steady in the ocean.


The waves flow’d over the Inchcape Rock;


They did not move the Inchcape Bell.


Had placed that bell on the Inchcape Rock;


On a buoy in the storm it floated and swung,


And over the waves its warning rung.


When the Rock was hid by the surge’s swell,


The Mariners heard the warning Bell;


And then they knew the perilous Rock,


And blest the Abbot of Aberbrothok


The Sun in the heaven was shining gay,


All things were joyful on that day;


And there was joyaunce in their sound.


The buoy of the Inchcape Bell was seen


A darker speck on the ocean green;


And fix’d his eye on the darker speck.


He felt the cheering power of spring,


His heart was mirthful to excess,


But the Rover’s mirth was wickedness.


His eye was on the Inchcape Float;


And row me to the Inchcape Rock,


And I’ll plague the Abbot of Aberbrothok.”


The boat is lower’d, the boatmen row,


And to the Inchcape Rock they go;


Sir Ralph bent over from the boat,


And he cut the bell from the Inchcape Float.


Down sank the Bell with a gurgling sound,


The bubbles rose and burst around;


Quoth Sir Ralph, “The next who comes to the Rock,


Won’t bless the Abbot of Aberbrothok.”


Sir Ralph the Rover sail’d away,


He scour’d the seas for many a day;


He steers his course for Scotland’s shore.


So thick a haze o’erspreads the sky,


They cannot see the sun on high;


The wind hath blown a gale all day,


At evening it hath died away.


On the deck the Rover takes his stand,


So dark it is they see no land.


Quoth Sir Ralph, “It will be lighter soon,


For there is the dawn of the rising Moon.”


For methinks we should be near the shore.”


“Now, where we are I cannot tell,


But I wish we could hear the Inchcape Bell.”


They hear no sound, the swell is strong,


Though the wind hath fallen they drift along;


Till the vessel strikes with a shivering shock,


“Oh Christ! It is the Inchcape Rock!”


He curst himself in his despair;


The waves rush in on every side,


The ship is sinking beneath the tide.


But even is his dying fear,


One dreadful sound could the Rover hear;


A sound as if with the Inchcape Bell,


The Devil below was ringing his knell.

Time to Write & Time to Clean up 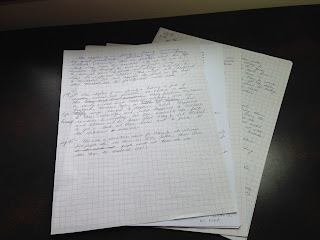 I have been telling the story of my mother's family since my children have been old enough to listen and I have been making notes and writing versions of this side of my family's stories for years. Early versions were handwritten or typed [on a typewriter].

It is time to clear out all those early copies, both paper & digital. I have been emptying my file cabinet drawers. I recycled old family tree forms, outdated lists of library holdings, duplicate & triplicate copies of old letters [originals are safe & their images are in the book], duplicates of too many papers,... It feels good to clear things out. 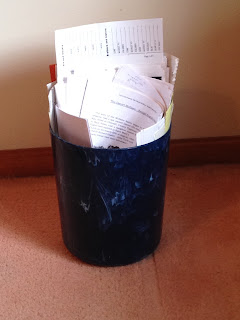 The clearing out will make room for the next book. 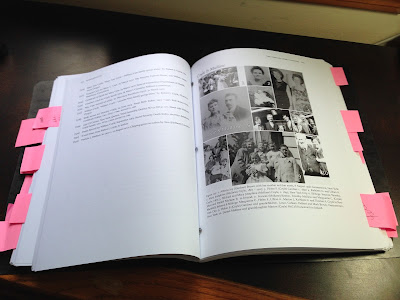 Each time we think the final copy is in our hands my daughter & I give the book another read through and find another correction or addition we need to fix: captions to be corrected, grammar fixes, additions to family timelines, layout alterations & etc. Better to find them now, before the book is printed. We have rough copies made quickly at Staples but not a final copy. It is a process that we are enjoying but we are also looking forward to finishing & moving on.

We had family photos taken last week. Once we have these digital copies to add to the final section, we are ready to close the book, sit back & think about the next book. 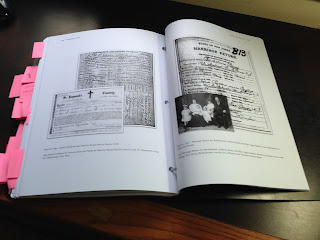 Time to Write: Hold Everything! 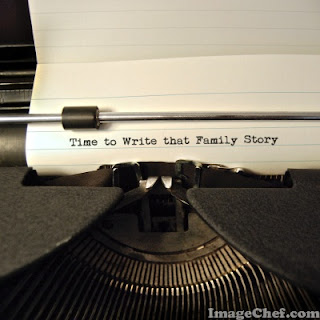 My mother’s family has been the focus of my genealogy recently. My editor, my daughter Alyssa J Pasquale & I have spent long hours fine-tuning the book I am writing about the family. My daughter has made my research look very professional.

Yesterday I went off to Staples to get the 364 pages printed out. I work better with printed pages than images on my laptop screen. I have been going through, page by page finding little things (punctuation & capitalization) we missed as we went through it the dozen times before.

No, I did not solve a big mystery. I still do not know when or where he died. However, I did find Michael and family in a census report I had not found before.

If you hear loud noises coming from Illinois, don’t worry. It is just my editor daughter learning we have to make more changes to the book!