J. K. Brumfield Has His 92d Birthday
Tylertown Veteran of Civil War Said to be Oldest Mason in the State
Initiated 66 Years Ago

Jesse K. Brumfield of Tylertown, said to be the oldest Mason in Mississippi celebrated his ninety-second birthday Thursday in the home of his daughter, Mrs. Lovie E. Ball. Mr. Brumfield is one of the two living charter members of Tylertown Lodge Number 392. He was initiated into the order 66 years ago in Holmesville when he was on furlough from the Confederate army. He was first Lieutenant of Company K, Thirty-eighth Mississippi regiment in the Civil War and served four years, with distinction. He has four children: C. L. Brumfield, Superintendent of Education in Walthall County; Mrs. Lovie E. Ball of Tylertown; Dr. Clyde Brumfield of Donaldson, Louisiana and Mrs. Jesse Davis of Abilene, Texas. Until about a month ago Mr. Brumfield enjoyed good health, but since that time he has been confined to his room.

Not only does this newspaper article give family information about J. K. Brumfield, but it gives military information. That information led me to fold3.com to verify his military service. I did find Jesse K. Brumfield there. He was a Sergeant in Company K, 38 MS Regiment. One undated record show that he was wounded. Other records show he was captured by the Union forces in Vicksburg on 4 July 1863, became a prisoner of war and was paroled as evidenced in this 8 July 1863 record shown below. 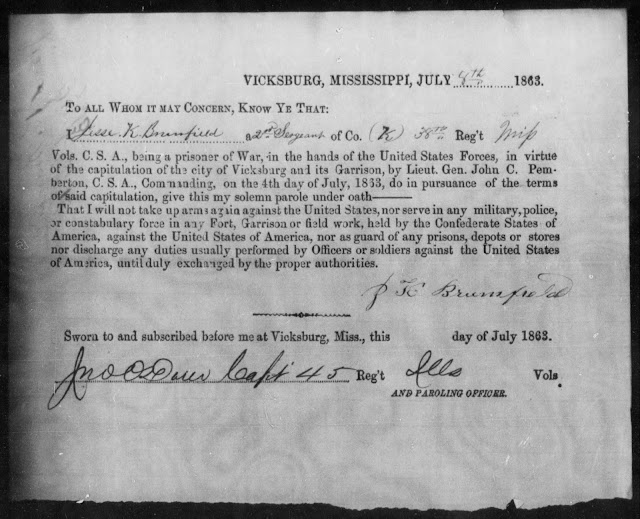 During the recent NGS conference in Raleigh I purchased several books to further my genealogical research. Most of those books were recommended by the speakers during the sessions I attended. The speakers mentioned the books in their talks or listed them in their syllabus or both. I uncovered others during my Exhibit Hall visits. I plan to closely analyze these books over time but here is a general idea of the contents of one of those books.

The land grant books by Margaret M. Hofmann were recommended by all the speakers who talked about land records in North Carolina. It was an easy decision to visit her booth at the Exhibit Hall. I wanted to purchase the full set of books but contented myself with purchasing these books which covered the areas where my family lived: 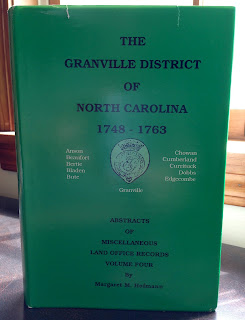 Even the introduction of this book is valuable, with its history and explanations of land grants.

It is the intention of this introduction to furnish sufficient information about the land office and its records to assist the various classes of researchers who use the records. The introduction will, therefore, provide a brief background of the proprietary and a description of its territory, a discussion of the operation of the land office and an abbreviated institutional account of the proprietary.

There is both a name index and a place index.

This book includes warrants, plats & entries. Many details for each are included such as the grantee & grantor, the number of acres, location, dates, etc. There is both a name index and a place index. I found several family members in this book. I am still sorting them out.

This book has several of my Alford family members and their land transactions. There is a long list of Browns who I still need to look at closely for possible connections.

Look for these books if your family lived in the Granville area of North Carolina. They have certainly helped my research.

I am guessing that the 330 grandchildren is an error! 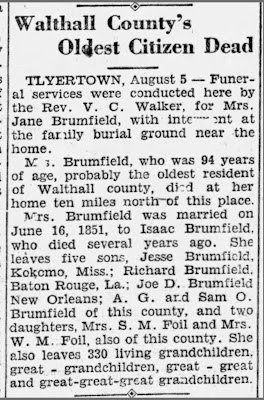 Do you struggle with your research: what to cite and how to cite it clearly? I do. Over the years I have purchased and used several books to learn when and how to deal with reference materials, from hand drawn family trees, to online census reports, to published county genealogies. I bought the MLA Handbook for Writers of Research Papers by Gibaldi & Achtert (1988). This is a nice guideline for writing, punctuation, etc. It does not deal with unique genealogical sources like photographs. I bought Cite Your Sources by Lackey (1980). It worked in general but there were always unique sources that did not fit in the format. There were suggestions for oral interviews but online sources were not in major use then. I bought Evidence: Citation & Analysis for the Family Historian by Elizabeth Shown Mills (1997). This is full of great guidelines and examples. I constantly tried to find an example that was similar to my source to use.

Basically, I did not understand the ideas behind citations. However, while I was at the National Genealogical Society’s Conference in Raleigh I purchased two books by Thomas W. Jones. At the NGS Exhibit Hall booth I bought Mastering Genealogical Proof. In my hotel that evening I started reading it and things made sense! The next day Mastering Genealogical Documentation went on sale and I was fortunate to buy a copy before they sold out.

And, on the last day, I attended the NGS lunch and listened to Thomas W. Jones speak. In my post I wrote:

He talked about a serious problem among genealogists, ‘Citation Anxiety’, and had us laughing as we ate our lunches. The main message he shared was: Content is More Important than Form. By the end of the luncheon our anxieties were fading and I was actually looking forward to citing my sources. 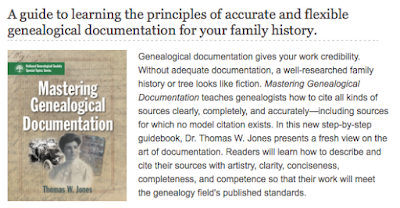 Since I have returned home I have been reading these two books and understanding. Every citation needs to answer five questions, when possible: Who? What? When? Where is the source? Where in the source is the information? Within this framework there is freedom to be flexible. A variation for a particular source is fine. Of course, there are correct ways to use colons, parenthesis, italics, etc. Those are not restraints. They help to clarify your source so the reader will understand where our information originated and where, if desired, they can find it for themselves.

I had been working on a document centering on the Alford branch of our family. I had 243 endnotes over ten pages. Sitting with Mr. Jones’ books I took notes on index cards of those five fundamental questions. I looked again at each citation. Several days later, I am now proud of my citations. I don’t need to print them in a tiny font and hope no one has a magnifying glass! My ‘Citation Anxiety’ has faded from an engulfing fog to a thin mist. Now I will work on the citations connecting to the document on the Ashley family. I have only two pages of endnotes and now I know much more about how to write citations! Want to get rid of your anxieties? Give these books a read.