Our ancestor, John W. S.  Wolf, son of John Franklin Wolf & Elisabeth Burkholder died in 1908. He was my 2nd great - grand uncle. His obituary appeared in the Medina County Gazette (Ohio) on 25 September 1908. It is a unique tribute.

John W. S. Wolf was born Sept. 24, 1841, in York county, Pa. When he was 12 years old he came to Ohio. Here he grew up to manhood, and at the call for volunteers in the Civil war he enlisted and served three years, belonging to the 120th O. V. I. In 1867 he married Elizabeth J. Anderson of Dalton, O. To them were born five girls and four boys. One son died in infancy. The rest survive him. For the last two years of his life, Mr. Wolf was a great sufferer, but bore it patiently to the end. He was blessed with an ambition for work which outlived his strength, desiring in his last years to do work which his strength would not allow. The family and neighbors did all in their power to relieve his suffering, but to no avail, and on Sept. 13 his spirit took flight to that better world. Funeral services took place at the family home near center Guilford on Wednesday, Sept. 16, at 9:30 o’clock, conducted by Rev. Leith of the Presbyterian church of Seville. Our beautiful American flag showing trueness, bravery and purity, was draped over his casket. He was laid at rest in Woodlawn cemetery, aged 66 years, 11 months, 19 days. Relatives present from afar were: W. Wolf and wife, H. Shelley and wife, G. Thordyke and wife, all of Akron; John Anderson of Ottobein; Joe Wolf of Dundee; and J. Anderson and wife of Canton.

22 February    1846    Mariah B. HALL
1906    Mary Thelma ELLZEY was born in Mississippi, daughter of William ELLZEY & Amanda FORTENBERRY. She married Roy Jesse Brown. They had one daughter.

Very exciting news...contact with a 'new' cousin! Shaunna is related to us through the Gruissy family. Her grandfather is Neil Arthur Spice; his father Vernon Arthur Spice; his parents Emmaline Floy Moore & Arthur Spice; Emmaline's mother was Caroline Louise Gruissy Moore; Caroline's parents were Augustus Ceaser Gruissy & Mary Ann Everett. Looking forward to learning more about this part of our family & sharing it here.
Posted by Colleen G. Brown Pasquale at 9:36 AM No comments: 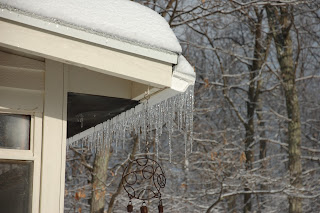 Recently my genealogy research has been slowed down due to winter life in the ‘great’ northeast. From every window in my house I see only white (snow, snow, snow) and grey (the trees & sky). The woods, my gardens, the bird houses and feeders and my pretty new potting shed are all covered in snow. Not a sprinkling of snow, the kind that glitters on the cover of a Christmas card. This snow is like a thick meringue on a lemon pie, higher than the tops of my boots, taller than my legs. It’s the kind of frigid snowy winter that makes you feel isolated from even your nearest neighbor. My research trips to archives, libraries and cemeteries are on hold until spring.
My genealogy, of late, has taken another form. I am wrestling with Microsoft Word 2007, putting my Mark family research into book form (almost 400 pages). This can be very satisfying. After carefully reading the instructions in the help menu and watching on line tutorial videos I have a terrific Table of Contents (a manual table with three levels) and classy page numbers (in the Conservative Footer, centered). Formatting can be tedious when I make sure each fact is footnoted accurately. (I have well over 1,000 footnotes.) Formatting can be fun when I insert photographs of relatives, sometimes long gone or far away, into the neat sidebars (cubicles side bar) of the book. My latest formatting step has been frustrating. I’m attempting to correct errors I made in my index. The help menu is no help. I’d like to delete it and start over but can’t figure out how to do that. As my husband struggles to keep our long driveway clear of ice and snow, I struggle to keep my book clear of typos and glitches. Perhaps by the time the daffodils in my gardens raise their heads to look for the sun I’ll be able to raise my head from my laptop and look for new family discoveries in the archives again. Until then, I will  have another cup of tea and fight with that **!** index.
Posted by Colleen G. Brown Pasquale at 8:44 AM 1 comment:

1 February    1787    Nancy PERKINS was the second wife of Moses Brown. His first wife, Sarah ROBERTSON, died in 1810 in Georgia. She had four children. She was my 4th great grandmother. Nancy had seven children, 4 daughters and 3 sons.
1861    Euseba Fortenberry REGAN
1884    Clara Estella WOLF

10 February    1891    Infant Girl ALFORD was born in Mississippi, the 12th child of Needham Edwin ALFORD & Mary Luzina Stafford. The baby died on the day she was born.
1905    Homer Grant SHEETS