This obituary is typical of the 1940's. Sarah is described only in relation to her husband and son. There is nothing of her interests or personality. It is helpful for genealogical purposes but I wish it would reveal more of the woman herself. 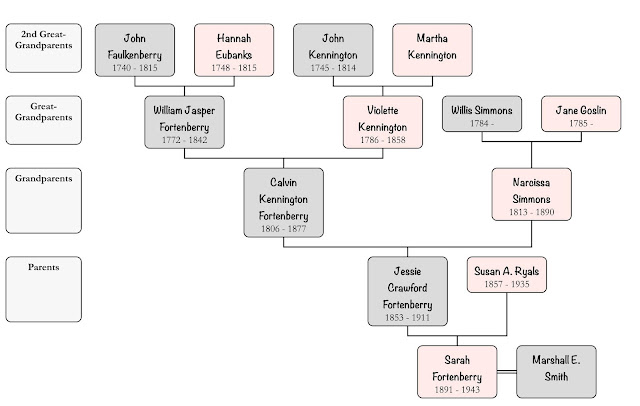 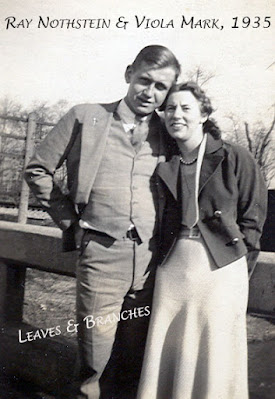 Ray & Viola (Mark) Nothstein, 1935Anyone in the family will be quick to tell you what they remember about Viola. She never forgot a birthday. She sent birthday cards to everyone in the family, which I personally know included her grand nieces and nephews and her great grand nieces and nephews.  I looked forward to receiving those little flowery cards with a handwritten note each year.

Viola (Mark) Nothstein was the fourth child of Thomas and Regina Mark.[1]She told me she was named after her Aunt Rephenia Cathern (Gruissy) Nichols (her mother’s older sister). She made it very clear that her middle name was not Catherine. Her nickname was ‘Vie’, given to her by a boss for whom she once worked.[2],[3]

Viola said her favorite toy as a small child was a "Nanny Doll" which is 200 years old. When she was a child she wanted to be a school teacher. She liked going to school because she "wanted to learn". When asked how she celebrated her birthday as a child she wrote, "For Owen, Clarence and I, having birthdays so close together were celebrated with the Sunday school class having a party."

Viola said that she and Owen were “pretty near alike, like twins though we were born two years apart. We were almost like twins. In fact, a lot of times Mother passed us off as twins when we were young.  See, I was small for my age, very small.  And Owen was a little big for his age.”  They took a trip to see their Aunt Rephenia Mark Nichols. Regina told people on the train that Viola and Owen were twins.[4]

When Viola was beginning second grade her Aunt Rephenia came for a visit.  She wanted to take Viola back to Michigan with her. She wanted to ‘build her up’. Regina checked with the doctor who thought the change might be good for Viola. So she spent several months in Michigan. Schools there were behind the schools in Ohio so Viola was put ahead a level. She gained a little weight and had a good time with her aunt and uncle.[6]

After school she did housework. During summer vacations, she worked. Her family never took summer vacations. Her first jobs were ironing or babysitting. Viola's talents were drawing, painting and "fancy work". Before she was married, Viola did housework for people.  She worked in a shirt factory and dress factories.  She also worked in a restaurant.[7]

Viola married Raymond Alexander Nothstein. She met him when she, “double dated with another girl that was with him."  On a typical date they would go "to a show".  They were married on 10 July 1935.[8]She remembered that she wore a white lace dress to her wedding. Viola and Raymond were married at 2:00 pm at Wadsworth Methodist Episcopal Church by Rev. Harold Buckey. Raymond had been in the Navy at one time.  He was a farmer.

After the breakup of her marriage with Raymond, Viola moved to Florida. Her daughter lived there. Viola bought a house nearby. 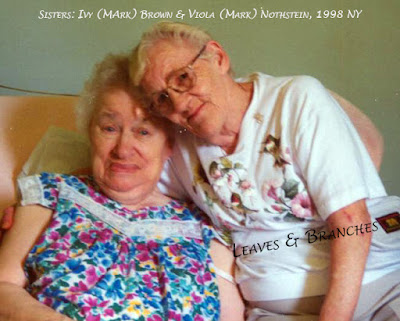 A note in a 1997 Christmas card from Viola she wrote,” I broke my right wrist in April. It was so bad that they put pins in it for 6 weeks and then a splint on till the end of July.  It was terrible trying to do things left handed.  I’m finally able to write again.”[9]

We have been making juice of our lemons & oranges and still have juice oranges on the trees. I’m trying to plan how I can come to New York this summer. I would like to see all of you up there. You know that I don’t drive. I also smoke so I don’t know who can stand to have me at their house while I’m there and can take me around. The tornado just missed us by 3 miles. We have been very Lucky with all the tornados & Hurricanes that have been close to us.[10]

A June 1998 letter gave her flight information for her visit from Florida to New York State. She stayed in Poestenkill with our family and we took her to visit with many family members during her visit. She visited her older sister, Ivy Mark Brown, in the nursing home.

In December 1998 Viola fell and broke her hip. She wrote that she was in a rehabilitation center for a month. In her July 1999 letter she said she was able to get around without using a walker or a cane.[11]

In December 2000 Viola wrote about moving from 1099 Kingswood Way, where she had lived for many years, to 1098 Wexford Way. Both were in Port Orange, Florida.  She wrote, “Bee & I moved across the street.  The house on Kingswood was getting too small for the six of us. It’s a smaller house but we’re still close to them.”  In the same letter she said her son, Kenneth, had been ill.[12]

After her death, Viola’s daughter sent me a prayer card which says: 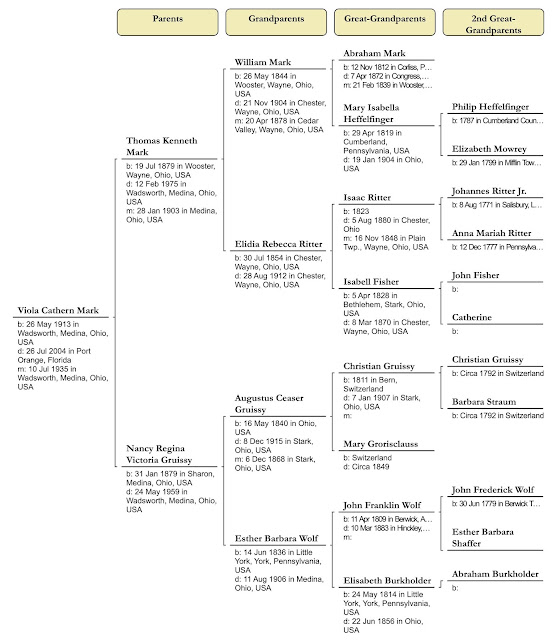 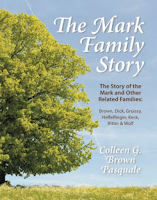 Happy St. Patrick's Day!
I love this holiday. Why? Because I have strong Irish roots, especially through my maternal side. My mother's mother was Helen F. Coyle Gardner. Her parents came from Ireland to New York City in the late 1880s. And I like this holiday because it is my birthday. Yes, those parades and the green beer are for me! 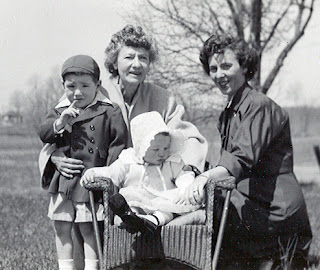 This photograph shows three generations:
My Nana, Helen F. Coyle Gardner (1897  NY - 1965 NY),
My mother, Alberta Joy Gardner Brown (1928 NY - 1992 NY),
My older brother & the baby is me, Colleen G. Brown Pasquale
Details on Helen's ancestry follow in the Pedigree Chart & links to other posts. Before you read those details, here is an Irish Blessing for today & always.
May you have warm words on a cold evening,
A full moon on a dark night,
And a smooth road all the way to your door. 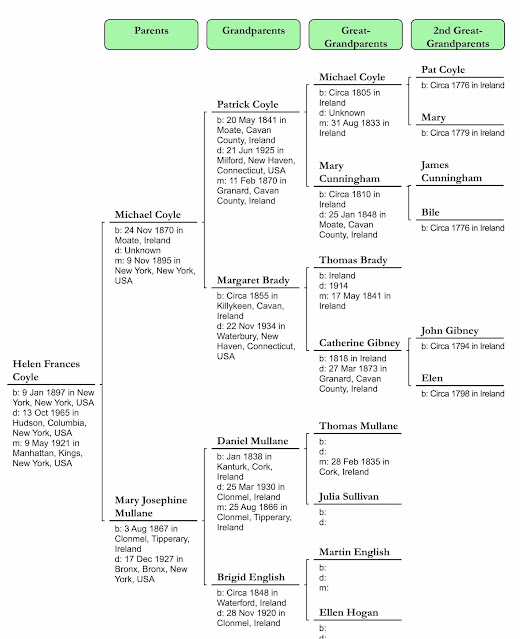 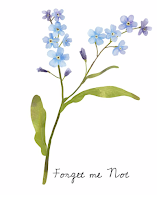 Alexander Brumfield Dies at 90. Funeral services for Alexander Griffin Brumfield, 90, Rt, 1, Tylertown, were conducted Tuesday afternoon at 2 from the Magee’s Creek Baptist Church. Burial was in the church cemetery with Masonic rites.

Mr. Brumfield died Monday afternoon at his residence in the Salem community where he had lived for the past 65 years. He was a retired farmer and was born in April 1873 in the “Old Pike County” area of present Walthall County.

Using websites such as Newspapers.com, we researchers can find news of our families. Weddings & Obituaries can often be found. But smaller occasions were also reported in small local newspapers. This brief social clipping describes a Sunday family dinner for the Fortenberry family in November 1950. 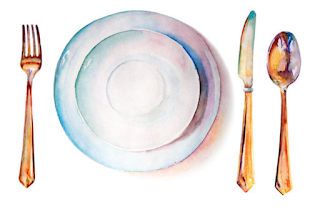 My notes on the dinner guests: 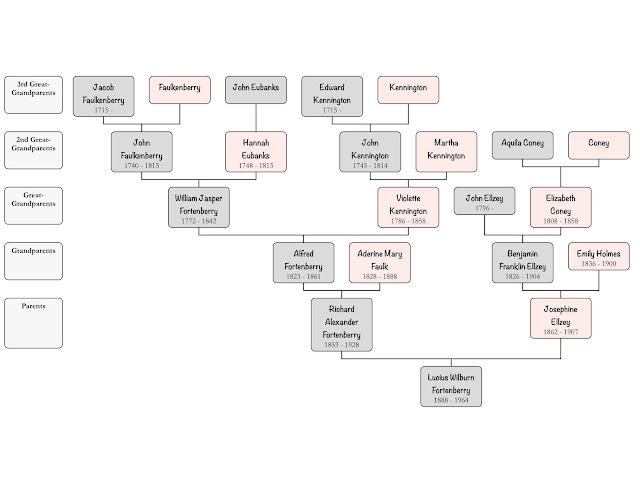