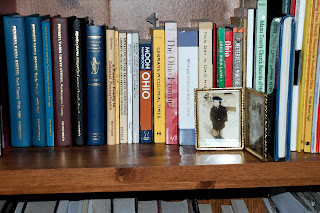 Scroll down to view books by state.

Always be sure to give credit to the author for any information you use.

Knox, Larry D. The Ritter Family of Lehigh and Northampton Counties in Pennsylvania, the Descendants of Isaac Ritter in Wayne and Ashland Counties, Ohio. Volume 1. Privately Published, 1999. Larry sent this copy to me.There is a copy in the Wayne County Library in Ohio. It is filled with information on the Ritter family and history of the locations where they lived.

Potter, Dorothy Williams. Passports of Southeastern Pioneers 1770 - 1823. Reprint. Baltimore, Maryland: Genealogical Publishing Company, Inc., 1990. "The Passports and even the geographic area referred to in this book need clarification because it is somewhat unusual to associate passports with travel within what is now the United States, and one has to recall that the southeastern states occupy an area often referred to as the southwest when these passports were written. The majority of passports collected herein authorized passage through Indian or foreign-held territory east of the Mississippi River in the period 1770 - 1823." Contents include: Spanish Passports in the Mississippi Valley, British and Spanish Passports in West Florida; War and State Department Passports; State Passports for Pennsylvania, North Carolina, Georgia, Tennessee and Kentucky.

Criminger, Adrianne Fortenberry. The Fortenberry Families of Southern Mississippi with Early Records Concerning the Faulkenberry/Fortenberry Families of the South. Easley, South Carolina: Southern Historical Press, Inc., 1984. Contents include: the Evolution of the name; early Family Records; the Family of William & Violette Fortenberry; Related Families, Kennington, Brown, Simmons, Wyatt Smith, Ellzey, Faulk, Blackwell; Other Mississippi Families; Georgia Families and much more, including personal letters and maps. I am very happy to own a copy of this book. It has yielded much information on my Brown family line & its branches.


Fortinberry, G. K. Abstract History of the Fortinberry Family. Privately Published, 1942.  This is available on Microfilm #1036152 at the Family History Libraries. Mine has been printed from that microfilm. There is no index. If you'd like me to search for a person or family in this book, please give as much information as possible to ease the search.

Bittinger, Lucy F. The Germans in Colonial Times. 1986 Reprint. Bowie, Maryland: Heritage Books, Inc., 1901. This is not a book to search for surnames. However it paints a picture of the times our ancestors lived in. Talks about early Germans in many states, Palatines, Mennonites, The Germans as Pioneers, The Germans in the Revolution & more.

Bowman, Diana L. The Pennsylvania Herald & York General Advertiser 1789 - 1793. Book 1. Apollo, Pennsylvania: Closson Press, 1996. "Information compiled from the paper is from letters, advertisements, letters in post office, sheriff's sales, etc..It's intended for the use of genealogical research and helping understand those that came before us." During this time Adams County was still a part of York County. A surname index is included.

Closson, Bob and Mary. Will Abstracts of Northampton County, PA 1752 - 1802. Apollo, Pennsylvania: Closson Press, 1982. Listed by surname. Gives dates, residence, names of family members listed in Will. I found Casper Ritter from Bethlehem for my records.

Fisher, Charles A. Central Pennsylvania Marriages 1700 - 1896. Reprint. Baltimore, Maryland: Genealogical Publishing Company, Inc., 2005. Includes marriages in Union & Snyder counties & Revolutionary War soldier marriages. Note says "Users of this compilation should remember that this is not a complete record of all marriages that took place in central Pennsylvania, but only such as the compiler was able to locate in public and private records. Many of these have never before been published."

Hively, Neal Otto. Original Pennsylvania Land Record Series: Germany, Conewago, Union, Mount Joy, Mount Pleasant & Straban Townships. Volume 1. Gettysburg, Pennsylvania: 2008. This is a wonderful set of books that I purchased while visiting the Adams County Historical Society in Gettysburg, PA. There are also maps available that accompany these books. You may use or purchase the books at the Historical Society. Many details on the land transactions are included. Index by surnames, place names & tract names.

Humphrey, John T. Pennsylvania Births, Lehigh County 1734 - 1800. Washington, D. C.: Humphrey Publications, 1992. Names are listed alphabetically by surname. Information given: date of birth, first name of each parent & name of church  the information came from. I found a long list of my Ritter ancestors in this book!

Humphrey, John T. Pennsylvania Research: County and Township Records. Washington, D. C.: PA Genealogy Books, 2006.  The Pennsylvania counties are listed alphabetically, giving the date the county was established & the origin of the county name. Information on county and town records are included. No family names are given. A good resource book for your shelf.

Humphrey, John T. Pennsylvania Gravestones, Northampton County. Washington, D. C.: Larjon & Company, Inc., 2000. Surnames are listed alphabetically. Information may include: dates of birth & death, age, spouse, comments and source. Source is cemetery where gravestone is located. Not all the above information is shown for each person. I found Ritter information for my research. A few Wolf & Wolff names are included.

For books by John Humphrey you may contact him at: P. O. Box 15190, Washington, D. C. He has many more books that are useful for Pennsylvania research.


Ervin, Sara Sullivan. South Carolinians in the Revolution. Reprint. Baltimore, Maryland: Genealogical Publishing Company, Inc., 1976. Contents include: South Carolina Pension Roll with Service Records; Names of Officers; Medical Men; Revolutionary War Prisoners; Soldiers from Other States and more. maps, photos, charts. Index of both men and women. I found this book in a charming used book store in Manassas Park, Virginia,  Prospero's Books. I have not as yet uncovered any of my ancestors inside but hopefully can find someone for you.

Salley, A. S. (2011) The History of Orangeburg County, South Carolina From Its First Settlement to the Close of the Revolutionary War. Westminister, MD: Heritage Books.