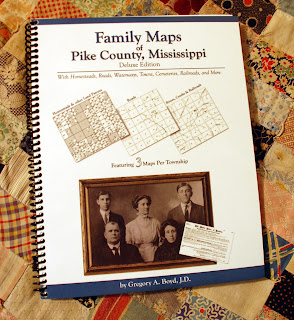 I recently uncovered the children of Hollis H Fortenberry, my 2nd great grand uncle. I discovered that Hollis and his wife, Louise were living in Pike County, MS with seven children. I had previously only known about one child for this couple. I was able to find them because I found them on a map which led me to a census report for the family.
I’ve uncovered a wonderful series of books published by Arphax Publishing. The book I have is--

I first saw these books in March when I did research at the Family History Library in Salt Lake City, Utah. I was delighted to find many members of my family in the pages. I made photocopies of a couple pages. After I returned home I decided I wanted to own a copy and ordered the Pike County volume through Amazon.

Part 1. This part of the book includes: Where Pike County lies within the state; Counties that surround Pike County; Congressional Townships; Cities & Towns; Cemeteries in the county; Surnames in Pike County Patents & a Surname Index.

Part 2. Pike County is divided into 12 sections. For each section there is: a land patent index, a land Patent Map, a Road Map & an Historical Map.

For example, I went to map 12 and found Hollis H Fortenberry in the land patent index with an 1853 land patent. I knew Hollis Horton Fortenberry lived 1825 – 1867 & had been born in Pike, MS. I turned to the land patent map and found him in section 31.On the same map I easily found two of his brothers, Gasua C & Burrell T Fortenberry, and several other family members. Turning the page I came to the second map of the same area. This road map shows the nearby towns of Progress, Smithburg and Simmonsville and two Fortenberry Cemeteries. Turning yet another page is the third map of the same area. This shows that Hollis lived on a stream. The third map would also show lakes and railroads if they are in the area. I love it. I have three maps of the place my ancestor lived, each map giving me more information, like where to search for town and cemetery records.

ArphaxPublishing also has map books for;
Arkansas, Illinois, Indiana, Missouri, Utah and other counties in Mississippi
Check their website for even more states. Each book comes in paperback, spiral bound or hardcover editions.

Find these books. There’s much more inside than I have mentioned here. They will lead you in new directions to uncover more about your family.