He had been a resident of Jackson for the past 33 years and was a retired building contractor and policeman. He was born and reared in Pike Co., he son of the late Mr. and Mrs. Ivin H. Fortenberry. He was a Masson, a Shriner and a member of the Baptist Church.

Funeral services will be conducted Saturday afternoon at 2 p. m. from the Baldwin Funeral Chapel with Rev. Robert Girling officiating. Interment will be in the Lakewood Memorial Park Cemetery.

Posted by Colleen G. Brown Pasquale at 3:00 AM 2 comments:

Forget Me Not: Burrell W. Fortenberry

Services were 2 p. m. today in Hartman – Hughes Funeral Home of Tylertown with the Rev. Silas Thomas officiating. Burial was in Rushing Cemetery in Walthall County.

Born Jan. 6, 1927, Mr. Fortenberry was the son of Burrell H. and Ossie Magee Fortenberry. He was farmer and veteran of the Korean War. 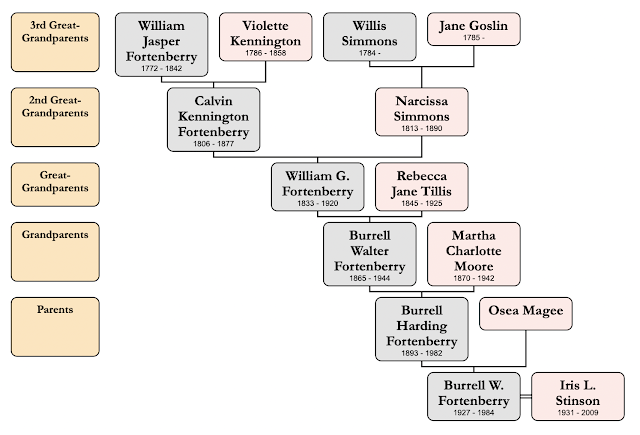 Posted by Colleen G. Brown Pasquale at 3:00 AM 2 comments:

Happy New Calendar! Want to make a genealogy gift that your family gets excited about? How about making a genealogy gift that your cousins look at almost daily? Well, I began making calendars years ago and it has become a hit. All year long cousins send me photos for the calendar. And when Christmas gets close they start asking when the calendar will be ready. Their enthusiasm fills my heart & motivates me to start another for the next year! 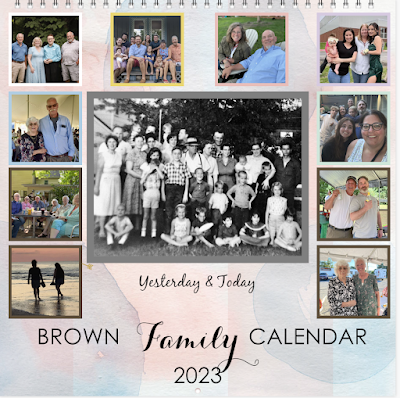 These are things I include in the calendar each year: 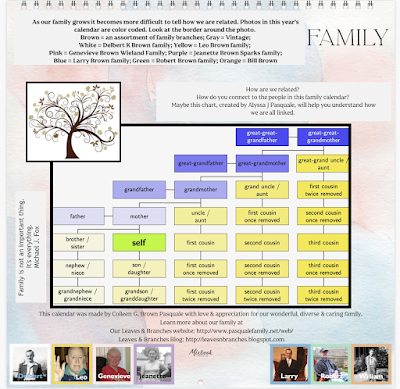 As our family grows it can be harder to know who everyone is. This year I put a border around each person's photo. The color of the border lets people know which branch of the family that person is from. For example, photos of my parent's descendants have a white border around them.
I have tried various programs to make these calendars. My favorite is Mixbook. Their program gives lots of flexibility. I can add as many photos and as much text as I want. The birthdays and anniversaries are saved so that I do not have to reenter those each year. They give me a discount because I order many copies & that is very helpful!
Here are photos of my family with this year's calendar. 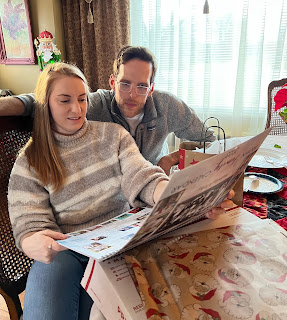 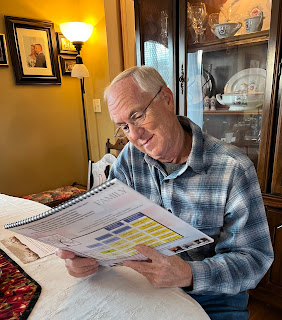 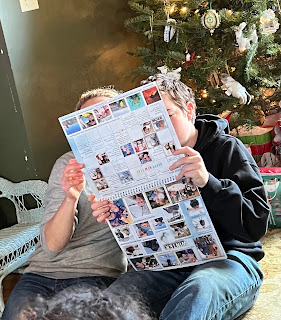 Email ThisBlogThis!Share to TwitterShare to FacebookShare to Pinterest
Labels: calendar 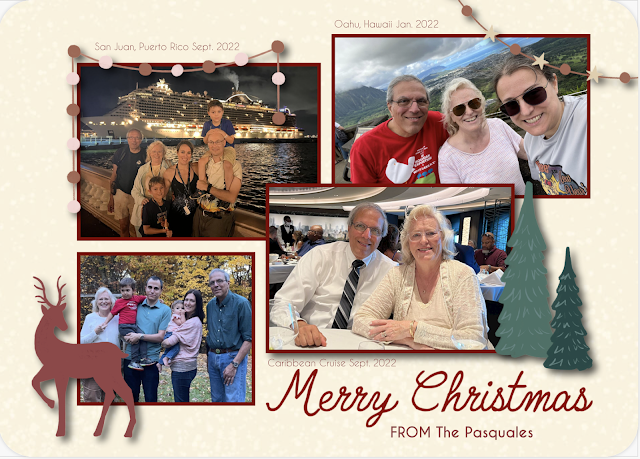 May the magic of Christmas follow you all through the year!
Colleen
Posted by Colleen G. Brown Pasquale at 1:00 AM No comments: 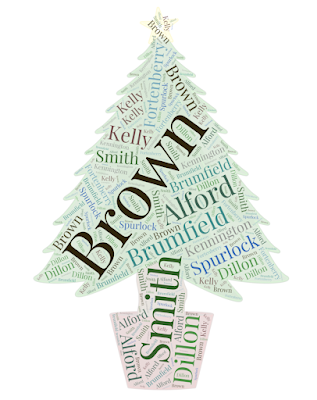 Here is a Christmas Memory from my grand aunt,

She talked about Christmas in Ohio when she was a girl, one of seven children.

Thomas Kenneth & Nancy Regina V. (Gruissy) Mark
Viola said her father, Thomas Kenneth Mark, 1879 - 1975, dressed up as Santa Claus for the program at church. He wore a red costume from the church. Viola said, “I remember one year when we were pretty small Owen got up in church and said, ‘That’s my Daddy!’ Another time Dad had a turkey for the church.  After the program Daddy come over to home and he had the red suit on and he’d said. ‘Now you guys better be in bed before I get back.’ He always done a lot around the church. If they wanted anything fixed they would always ask Dad.”

OUR BROWN ROOTS
I am working on writing, Our Brown Roots, the history of my paternal grandfather’s family & its many leaves & branches. I am trying to focus my time & efforts on finishing up that huge project but will give some time to posting about the procedure here.

Here is an update on my progress with my book. I am very happy to have my first cousin, Nancy Jo (Brown) Dilley, helping me by editing this massive project. We have poured over every word, name, comma and quotation mark in the pages of this book. One chapter at a time, Nancy has read, edited and commented on our family's story. Then we met so we could look closely at each page.  We'd focus on every place her bright orange marker left a smiley face, a question mark, or note for me to address. My well read librarian cousin has given me very useful insights and comments.
After years of researching and writing about the 13 family branches in this book, I needed a second pair of eyes. I need someone who is not a genealogist. Most of my eventual readers will not be genealogists so I need that point of view. Have I explained land grants, relationships and historical settings so they are understandable? Are my charts and maps confusing or clear?
Nancy would had me one chapter at a time to edit and then we would move on to the next. We worked our way through the over 800 pages!
I saved my Word document on a thumb drive and drove over to my local Staples. They printed 2 copies and returned them to me in two heavy boxes. We emptied our 2 inch binders and refilled them with this draft. What will we do now?
EDIT,  EDIT, EDIT! 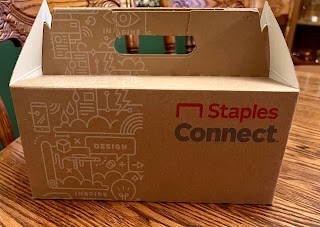 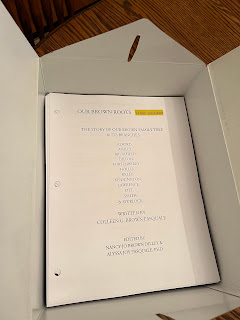 A Time to Write: 2B The MOST Elusive People

I am working on writing, Our Brown Roots, the history of my paternal grandfather’s family & its many leaves & branches. I am trying to focus my time & efforts on finishing up that huge project but will give some time to posting about the procedure here.

When I last posted about my progress on my book in progress, OUR BROWN ROOTS, I explained that having researched 13 branches of my paternal grandfather’s family, I was finishing up with my closest family stories. I was writing about my paternal grandparents and their children. How hard can that be?

Well, it is more a more delicate procedure. In writing about difficult financial situations, marriages the have not endured or other painful situations I do not want to offend any cousins. In writing the true story of my family I do not need to include every bad decision (I’ve made plenty of those.) or every family dispute in order to paint a true picture of my grandparents, my aunts and uncle.

In asking for stories about my aunts and uncles we sometimes found ourselves in tears. The more we loved them, the more the memories, the smiles and the tears.

One branch at a time, I consulted cousins. (translation: I became a nuisance, asking for photos, military document, letters and photos.) I wrote their chapters and gave them the printed versions of their family’s story for approval before moving on to the next cousin to bother. Thanks to all those cousins!

(If you are a first cousin who has something more to tell, tell me today!)

Two ladies who have been enormous help are the co – matriarchs of our family. Barbara & Bab, the widows of my father’s brothers, were a part of the stories and told me many things I never knew before. They added life to the book. I cannot thank them enough!

Fellow researchers, keep in mind this lesson that I have learned. It is not the oldest branches of the family that are the hardest to write about.

It is the most recent who are the most elusive. 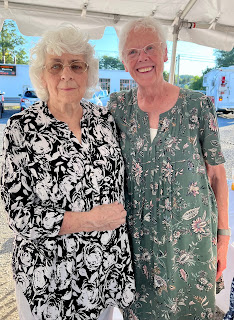 Thanks to my family!
Related Posts:
Posted by Colleen G. Brown Pasquale at 1:00 AM No comments:

Forget Me Not: George Washington Mark

According to genealogist, Larry Knox, George was a farmer who owned an orchard.  He lived south of Overton, OH. He married Elizabeth Shifferly on 20 November 1901 at Cedar Valley in Wayne Co., Ohio. In 1910 George rented a farm in Chester Township.  In 1920 George and Lizzie were still in Chester in Wayne County. He was a 42 year old farmer and Elizabeth was 39. George registered for the World War One Draft on 12 September 1918. He was described as having medium build and medium height with blue eyes and light brown hair. George and Elizabeth had no children. 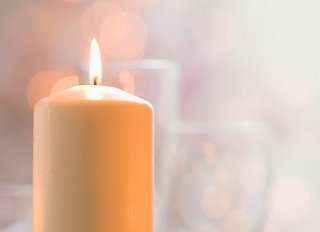 Set Mark Services. Wooster, Oct. 18. – George Mark, 60, died Sunday at his home in Chester township, from a heart attack. Survivors are his widow, five brothers and four sisters. Funeral services will be held Wednesday at 2 p. m. from the Bevington & McCullough funeral home, conducted by Rev. F. H. Zaugg. Burial will be in Wooster cemetery.

George Mark, aged 60 years, died Sunday evening at 6 o'clock at his home in Chester Township.  Mr. Mark, who had suffered from a weak heart, was doing his chores when he was stricken, dying very suddenly.  Survivors are his wife and the following followers and sisters:  Thomas, Medina; Amos, Chester; Charles, Chester; Mrs. Mary Shaw, Medina; Mrs. Maggie Kauffman, Canton; Emma, Wooster; Mrs. Elva Boreman, Chester; and one half brother, Melvin, Wooster.  Funeral Services will be held Wednesday at 2 p. m. from the Bevington & McCullough Funeral Home, conducted by Rev. F. H. Zaugg.  Burial will be made in Wooster cemetery.  Friends may call at the Funeral Home Tuesday afternoon and evening.