Here is my paternal grandfather, Roy Jesse Brown. He died when I was a toddler so I must rely on family members to learn what type of person he was.


Roy was one of 9 children of Jasper Pascal Brown & Rose Ella Brumfield. He was born in Osyka, Pike, MS. In 1910 his father was a farmer on a ‘home farm.’ His mother was the mother of 9 children, all of whom grew to adulthood. Roy was just 8 years old that year.[1]

In 1920 Jasper, Rose and children were in the Simmonsville Precinct of Pike Co., MS. Jasper owned his farm. Four children were still living at home: Hubert, Roy, Mildred & Thelma. Both sons worked on the farm with their father.[3]

Roy’s first wife was Mary Thelma Ellzey, daughter of William S. Ellzey & Amanda Adarene Fortenberry. Their daughter was Sylvia Rayleen Brown, b 20 Mar 1921 in Washington Parish, LA. This marriage did not last. They were divorced in December 1925.

Family stories tell us Roy hopped on a train and headed north. He got off in Ohio where there was a job available in a paper mill. Roy found a place to stay in a boarding house. He met Ivy Regina Mark, daughter of Thomas K. Mark & N. Regina V. Gruissy. Roy & Ivy were married 2 August 1927 in Seville, OH.[4] My grandmother (Ivy) told me they were married in her parents’ parlor. She said they just stood up and were married. She was just 19 years old. Roy was a 25 year old mill wright. Like his father, Roy was handy with tools and machinery.

My father was their oldest child. Delbert K. Brown was born 27 July 1928 in Rittman, OH.[5] He would become the oldest of 7 children: Leo, Genevieve, Jeanette, Larry, Robert & William. In 1930 Roy was still a mill wright, working and living in Rittman, Wayne, OH. My Dad was just a year old.[6]

Roy worked for Ohio Boxboard. In Arise Wild Land by Lindsey Williams, the author writes that the Ohio Boxboard developed the square ‘kitchen match’ box and the round salt box. It produced corrugated boxboard shipping containers. When it opened in 1904 one machine was over 200 feet long and the entire plant ran by electricity of 15,000 horsepower.[7] During the Great Depression Roy was one of many men who did not keep their jobs. According to his son, Leo D. Brown, Roy worked in the Ohio Boxboard but work got slow, “and the mill was just about shut down. He and Curly Hawkins and another guy … got a job building this big dam in Ohio. What happened was my father worked there one day a week. Curley Hawkins would work one day a week and then the third guy so everybody worked a little bit.”

Roy and Ivy lived in several different locations while in Ohio. While living in Rittman they lived at 64 Grant Street (1927), 51 Salt Street (1930), and 53 Grant Street (1939). They also lived in Creston and Sterling (1937), Ohio. At one time they lived out in the country on a farm. According to Leo Brown, “my mother said my father liked to move. “

In the early 1930’s Roy took his family to Mississippi to visit his family there. They took pictures of the Mississippi River. They visited relatives. There are pictures of Roy’s sons, Delbert and Leo, with their Mississippi cousins. Leo Brown remembers the heat. Leo’s sister, Genevieve also remembers that trip. She said her Grandmother’s house smelled like tea and lemons. Her Grandma [Rose Ella Brumfield Brown] put big, soft feather mattresses on the floor for the children to sleep on.

In 1941 Roy moved his family to Columbia Co., NY where he worked for two mills. One was the Midvale Paper Mill in Rossman. In Midvale he was a master mechanic in charge of repairs for the entire paper mill with a staff of eight men. Leo Brown said his father “did some blacksmithing things working at the mills.” He was the operational manager. The other was a mill in Stockport, locally known as the String Mill.

One day, in the early 1950’s, Roy was in a local pub having a drink. There was a fire at the mill. Roy rushed to the mill. He thought someone was inside the mill and he tried to get in to save his friend. It took three men to hold him back and prevent him from going inside. Roy’s son, Leo, believes the stress of that day led to Roy’s heart attack in 1953.

About 1954, Roy went back to Mississippi. He died there in 1956.[8] He is buried in Silver Creek Cemetery. Nearby are his parents and his brother, Hubert.

A newspaper clipping from a newspaper in Hudson, New York has an obituary for Roy:


“Roy J. Brown, formerly of Stockport, died Friday in Tylertown, Miss., where he had been spending the winter with relatives. The funeral was held there Monday with interment in Tylertown. Mr. Brown, 54, was a native of Tylertown. He had been a resident of Stockport since 1941 and had been employed at both the Stockport paper mill and Bonafide Mills. He was a member of the Stockport Fire Department. Survivors include his wife, who resides in Cobleskill; five sons, Delbert of Germantown, Leo of Schenectady, Larry of the United States Army, Robert and William of Cobleskill; two daughters, Mrs. Carlton Wieland of Hagman and Mrs. Elmer Sparks of Cobleskill; four grandchildren; several brothers, sisters, nephews and nieces.” 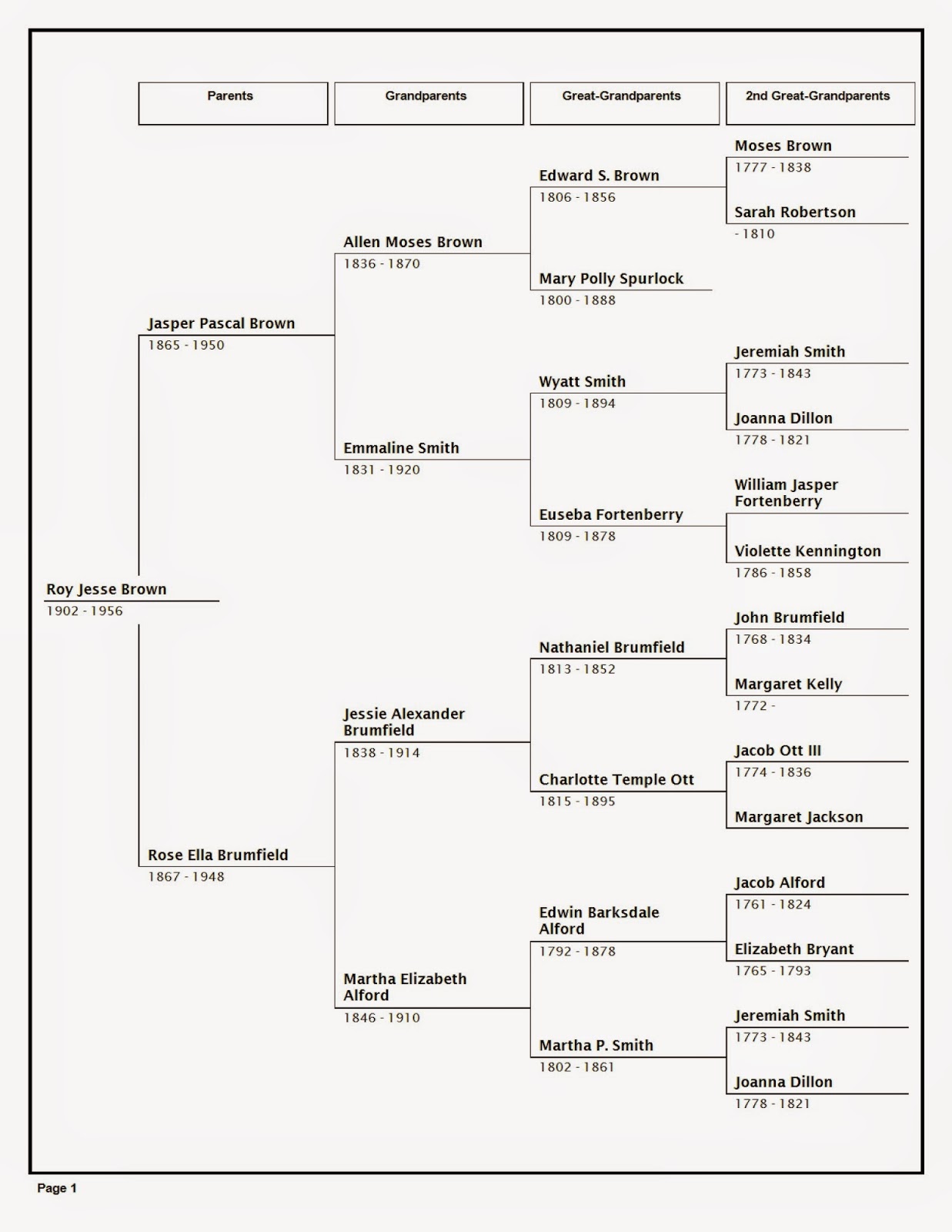 
This prompt comes from Amy Johnson Crow at her blog, No Story Too Small. She suggests
we “write once a week about a specific ancestor. It could be a story, a biography, a photograph, a research problem — any that focuses on that one ancestor.” Thanks, Amy for the suggestion!

Posted by Colleen G. Brown Pasquale at 9:00 AM