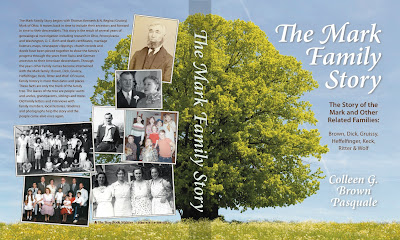 The Mark Family Story is in my hands, the proof copy, that is. A beautiful cover and 435 pages to check for format, spelling, grammar, accuracy and readability. Dozens of photos to check for correct captions. I can see that some of them will need to be adjusted. They are too dark or too light to be easily viewed as black and white photos. My daughter and Adobe Photoshop will improve those photos. Thanks Alyssa!
This is my last chance to make any adjustments to this project which I have been working on for years. I am excited about the look of the book and even more excited about how it will look when it is finally complete.
Be sure to watch my blog to discover when the book is done!
Posted by Colleen G. Brown Pasquale at 3:34 PM 3 comments:

Funeral cards can give us new information: the full name of the deceased, the date of death and the name of the funeral home. Some even give the birth date and other details of the person’s life.
My mother and grandmother kept these little cards and tucked them into prayer books, Bibles and other books. They kept the cards as a remembrance, a connection to someone they loved. Those same cards helped me to continue that connection. 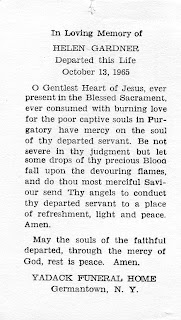 Mary Josephine (Mullane) Coyle was born in August 1867 in Ireland and died 17 December 1927 in New York City. Mary Jo was the mother of seven children. She died just four month before the birth of her only grandchild, Alberta Joy (Gardner) Brown.
Helen Frances (Coyle) Gardner was born 9 January 1897 in New York City and died 13 October 1965 in Germantown, New York. She had one daughter and four grandchildren.
Be sure to look for and hang on to these small treasures.
Posted by Colleen G. Brown Pasquale at 4:00 AM No comments:

A genealogist must be part detective and part pack rat. It can be difficult to know which yellowed papers, brittle documents or old photos to wrap in acid free paper or place in archival safe boxes for future generations. I cannot part with anything that once belonged to my Nana,
Helen Frances (Coyle) Gardner,
1897 – 1965. Anything that was once in her hands is a treasure.

I have a notebook that Helen used about 1915. It was made by the National Blank Book Company of 52 Duane Street, New York City and Holyoke, MA, patented in 1892. The metal rings that hold the hard cover and lined pages together are ‘National School Rings’, “the best fastening device to use in connection with university covers.”

Inside the cover, my young maternal grandmother wrote: 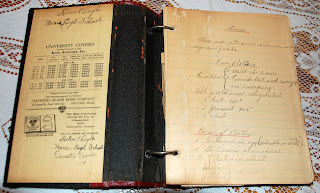 Inside are recipes for things like Cranberry Jelly, Biscuits, Black Pudding, Cherry Wine, Fudge, and Muffins in Helen’s handwriting. There are also notes on how to remove stains, how to make hair tonic and how to brew coffee.

Boiled Coffee
For one cup of coffee allow one rounded tabsp [sic] of coffee, 1 tabsp [sic] of cold water, a little uncooked egg and a cup of freshly boiled water. Scald the coffee pot, mix the coffee, egg and cold water thoroughly and add the boiling water. Put over fill and let boil then move off fire and keep warm.  Keep cover on. Coffee is a stimulant both to the heart and to the nerves.  Coffee also acts as a narcotic. Coffee with cream and sugar retains the actions on the liver and also makes one bilious. 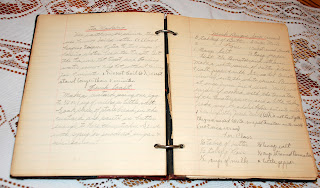 Strong coffee aids digestion in the stomach and is used for that purpose after a heavy meal.  Coffee should not be used by young people.

Posted by Colleen G. Brown Pasquale at 4:00 AM No comments:

Lillian Agnes Coyle, born 18 September 1911 in New York City, was the daughter of Michael and Mary Josephine (Mullane) Coyle. She was baptized on 1 October 1911. The Baptismal Certificate does not list a specific Roman Catholic Church. It does show that her godparents were Daniel Mullane (her maternal uncle) and Helen Coyle (her oldest sister and my maternal grandmother). Lillian was my grand aunt but I had very little contact with her.
Lillian's mother died when Lillian was just 16 years old. Lillian lived in New York City most of her life, graduating from Theodore Roosevelt High School in 1929. In 1930 she lived with her sisters, Marguerite, Marion and Kathleen, on Walton Avenue in the Bronx. Lillian was a bookkeeper at the time. The sisters liked to travel, visiting their Mullane family in Clonmel, Tipperary, Ireland, several times. She also took trips to Puerto Rico, South America and Japan.  Lillian worked for T.W.A. Airlines for many years. Later she worked for American Telephone and Telegraph Company. She worked for them for over twenty years.
In 1976 Lillian and her sisters moved to Sun City, Arizona. Lillian died in Arizona in 1987.
Posted by Colleen G. Brown Pasquale at 4:00 AM 1 comment: