These are charming little notes about my Mississippi cousins.

Mr. and Mrs. Willis Fortenberry and son, Karl, spent the weekend in Baton Rogue with Mr. and Mrs. Weldon Fortenberry. Karl remained until Monday to go on to Pineville, La., to enter college there.

These little newspaper clips have helped me to name some of the children of Willis & Ivy Fortenberry: Weldon, Karl & Bonnie. 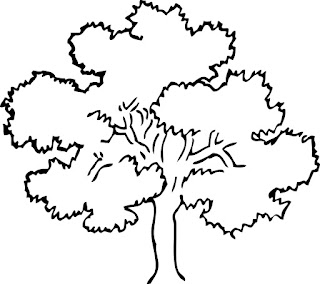 This is not a true obituary but it does reveal details on the death of a leaf on my family tree.

A verdict of ‘met death by reason of pneumonia was issued Tuesday by a jury called by Coroner Ray Cain in the disinterment of the body of E. T. ‘Tate’ Fortenberry, 53-year-old prominent farmer of Progress community who died in a Magnolia hospital February 9, 1941. The jury issuing the verdict included J. O. Dulaney, D. C. Brumfield, Fred Wilson, D. D. Varado, J. W. Goings and one other man. In connection with this case, Coroner Cain issued the following statement: “E. T. ‘Tate’ Fortenberry, Progress farmer, happened into Kelly’s beer parlor on South Boulevard in McComb on or about February 8. While talking to friends there, he was hit by a man he could not identify. I have witnesses who have testified to me that Wayne Knight allegedly dealt the blow. Mr. Fortenberry was carried home to Progress suffering a severe laceration of the head. He was then taken to a Magnolia clinic where he lingered some time and then died. Two of his sons, of New Orleans and New York City, came later and demanded the body be disinterred and a post mortem conducted for which a court order was issued February 14 by Judge J. F. Guynes to the coroner of Pike county. This order was ececuted immediately, with assistance of Sheriff Alton Davis and Deputy Sheriff George Guy. The jury could not reach a verdict that day because specimens had to be sent to New Orleans for analyzing. And the jury adjourned to February 25 at 1 p. m.” The coroner then revealed the verdict given by the jury he summoned in the case.


Note: In various records this man is shown to be
Tate Edward Fortenberry OR Edward Tate Fortenberry.

This is an amazing newspaper article, full of family information.

Passed away in Iowa a Few Months Ago
Moses Brown was a Cass county pioneer known to many of the older residents of this community, where the family settled in 1845, for which reason the following account of his death, together with a brief history of the family will probably be of interest here:

Moses Brown was born Jan 15th 1820 in Marion Co., Miss. A little more than fourscore and twelve years were rounded out when, after an illness of several weeks, he laid down the burdens of life and passed to the great beyond at 6:30 a.m. Monday, April 22, 1912, at his home in Mitchellville, Ia. He was married, May 12th, 1841, in Logan Co., Ohio, to Miss Elizabeth Monroe, a native of Culpepper Co., Va. They were the parents of thirteen children, all of whom grew to mature years except two. He is survived by his wife 88 years old and seven children, Mrs. Mary Mulligan of Phillips, S. D., Mrs. William Huff of Des Moines, Mrs. Arthur Thorp of Los Angeles, Calif., A> R. Brown of Cherokee, Ia., M. M. Brown, A. L. Brown and C. B. Brown of Mitchellville. There are sixteen grandchildren, twenty-three great grandchildren and one great great grandchild. Funeral services were from the Christian church, where he and his wife had been active members since tis organization, at 2 p.m. April 24th. Rev. J. D. Arnold delivering as address that well fitted the occasion [sic] being fully aware that it was an unusual event to pronounce an eulogy over the body of a man who witnessed the wonderful changes that had taken place within a period of almost one hundred years. Business houses were closed during the services. Appropriate music was furnished and floral offerings were numerous and beautiful.

He was the last living member of his family, his brother Aaron having died eight years ago aged 82 years. Uncle Moses Brown had an interesting history and could relate many incidents of his early life and events which he had learned from his parents. His grandfather, Edward Brown, was born in Newburn, N. C. His family were Scotch Quakers, opposed to war but in favor of independence, and he with the resident Quakers of the county attended the Mechlinburg convention where the first constitution of the United States was framed, a year before the Jefferson, and was one of the eight signers; was a soldier in the army until the close of the war.

His father [Moses Brown] was born in NC Feb 2, 1777. In 1804 he emigrated to Georgia and later to Mississippi and some years later to Louisiana, Although born and raised in the southland where slavery was an institution, the family were abolitionists in principle, and in 1825 they moved to Logan Co., O., where his two oldest brothers had settled in 1806, which formed the beginnings of a Quaker society among the Wyandotte Indians near Zanesfield. On reaching Cincinnati he freed his slaves. He was a soldier in the war of 1812 and participated in the battle of New Orleans, under Gen Jackson. On reaching Ohio a farm was purchased of Gen. Simon Kenton, which the family occupied until they settled in Cass Co., Mich., in 1845. His mother, Nancy Chandler Perkins, was born Feb 1st 1787, in South Carolina, was of German descent, and a near relative of Gen. Wade Hampton and lived in his father’s family when a girl. Her father emigrated to Georgia and later on to Mississippi where she was married in 1811 to Moses Brown.

The first school Moses attended was taught by Polly Kenton Murry, daughter of Gen. Kenton in her farm home. At age 17, he was apprenticed to a blacksmith at his own request, which occupation he followed through his life.

In 1844 he settle down in Brownsville, Cass Co., Mich., and lived in that vicinity until 1865, when he removed his family to Iowa. Mr. Mitchell, the founder of Mitchellville, told him if he would build a shop in the new village he would give him a lot. He accepted the offer. He bought more land, erected a home for his family and paid for it all in blacksmithing. Years later the Union school building occupied the block just across from his shop, which was a rendezvous [sic] for the school children until the last bell would call them to their work through all the following years.

He was ‘uncle’ and ‘grandpa’ to old and young, and children were never in his way. Sunday morning they would call for the pleasure of being lead or leading him to Sunday school.

He had a number of heirlooms, which he prized very highly. One was his mother’s family Bible given him by her mother while he still lived in Michigan and which she covered with the skin of a deer he had killed and dressed. He also owned a flintlock gun, which his father carried in the battle of New Orleans. In later years the stock became worn and broken and a new one was made from a walnut log.

He enjoyed hunting and fishing but never allowed the sport to interfere with his business except to make a trip farther north each year as the deer became scarce in Cass county.

Wm Ingling, a neighbor, and he once made a boat, and late in the afternoon loaded it on a wagon and went to Diamond Lake and fished the greater part of the night and came home for an early breakfast with 600 fish, which they divided among the neighbors. 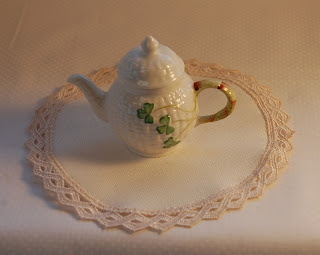 May your day be touched
by a bit of Irish luck,
brightened by a song in your heart,
and warmed by the smiles
of the people you love.

An Irish Blessing for you
on St. Patrick's Day, my birthday.

And here's a peek at my book,
Remembrances,
written about my Irish roots. 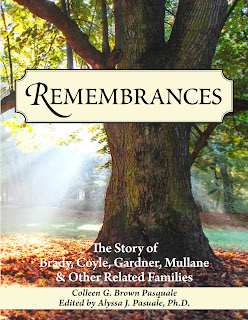 Email ThisBlogThis!Share to TwitterShare to FacebookShare to Pinterest
Labels: Ireland

He was the son of Moses Brown and Nancy (Perkins) Brown.


Moses Brown was my 4th great grandfather. Nancy was his second wife. 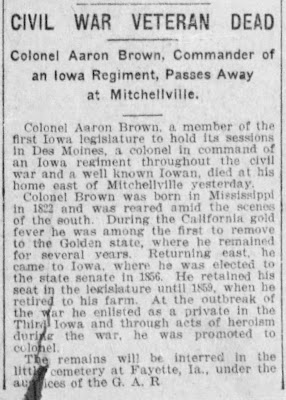 Colonel Aaron Brown, a member of the first Iowa legislature to hold its sessions in Des Moines, a colonel in command of an Iowa regiment throughout the civil war and a well known Iowan, died at his home east of Mitchellville yesterday. Colonel Brown was born in Mississippi in 1822 and was reared amid the scenes of the south. During the California gold fever he was among the first to remove to the Golden state, where he remained for several years. Returning east, he came to Iowa where he was elected to the state senate in 1856. He retained his seat in the legislature until 1859, when he retired to his farm. At the outbreak of the war he enlisted as a private in the Third Iowa and through acts of heroism during the war, he was promoted to colonel. The remains will be interred in the little cemetery at Fayette, Ia., under the auspices of the G. A. R.