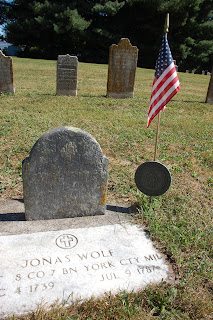 With Independence Day approaching,
it feels like time for me to review the
Revolutionary War soldiers in my family. Johann was my 5th great grandfather, on my father's side of the family.

"Jonas Wolf of Berwick Township, second lieutenant in the Fifth (Captain Peter Ickes) Company, Eighth Battalion, York County Militia, according to a return of the York County Militia made in April, 1778; he remained a member of this unit, under the same captain, when (in 1779) it became the Eighth Company of the Seventh Battalion, and was commissioned 'lieutenant', according to a return dated Je 17 and assigned to the year 1779, and one for the year 1783. Lieutenant in a detachment of the York County Militia under a command of Captain John Wampler, in actual service guarding prisoners of war at Camp Security in York County, D 7, 1781 - F 7, 1782.”[1]

Camp Security, Prison of War Camp in York Co, PA: Built in 1781, it consisted of log huts and a large stockade. British, Canadian & Hessian troops were held there. Many had originally become prisoners in Saratoga, NY.

The York County militia, who often sympathized with the prisoners and only loosely guarded the camp, ran Camp Security. A farmhouse still existing on the site may have been used as militia headquarters. The Continental Congress had no money to feed or clothe its military prisoners, so a parole system allowed prisoners to work for local residents thereby supplementing the camp's meager supply of food, clothing and blankets. Wives and children accompanied many of the prisoners, a common practice at that time.

Today Camp Security is the last remaining undeveloped prisoner-of-war camp from the Revolutionary War.[2]  I would like to look into this & visit the site of the camp. 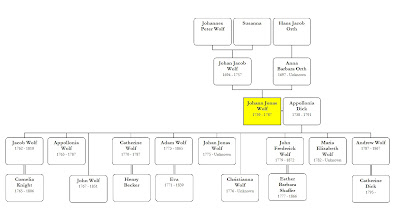