I have used US Census reports many, many times. I have also used Irish census reports. Both taught me a wealth of information about my family’s branches. For the first time I have information form the Hungarian Census.


According to Ancestry: The 1869 Census is a “people” census, attempting to enumerate all individuals of all religions, regardless of property ownership. The Census was created by the Hungarian Government. The broad scope of the census makes it particularly valuable for genealogical research. The census was mainly recorded in the Magyar (Hungarian) language, though census records from some areas may also include other languages such as Slovak.

The census is available in the LDS' Family History Library Catalog catalog as Place (Hungary), Topic (Hungary-1869 Census). The microfilms present the towns in alphabetical order of their current Slovak name, with the Hungarian name (under which the records were created) in parenthesis.

The census is available on line at JewisGen where it is searchable and in English. This is a terrific website with much information for Jewish research in more than a dozen countries.

My maternal grandfather was Nathaniel Gardner, son of Leopold Gartner and grandson of Markusz Gartner. My 2x grandfather and family are in the 1869 census in Tokaj, Hungary. The census gives me birthdates for the family and the names of his children. 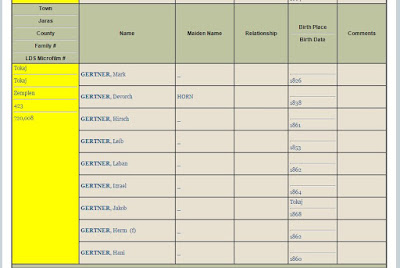 With Thanks.
Thanks to Robert J. Friedmanfrom Steps to the Past LLC. Robert is a professional genealogist who has been researching my Gartner roots for me. He is a member of the Association ofProfessional Genealogists. The census report is just a tiny portion of the information he has uncovered for me.