My Ritters from PA & OH found in IN

"Elmer Ritter. The Ritter family has been identified with Steuben County over sixty-five years. Elmer Ritter, who was born and reared in this county, has been in business at Fremont for a number of years and is the postmaster of that city.

"He was born in Steuben Township of Steuben County August 10, 1867. His father, Philip Ritter, was born in Union County, Pennsylvania, in 1820, a son of John Ritter, who was soon after the birth of this son moved to Wayne County, Ohio, and later learned the trade of carpenter, and in July 1852, he settled in section 6 of Steuben Township. He bought 128 acres of heavily timbered land, and built his house of hewn logs the same spring. In 1868 he constructed a more commodious residence, and his success as a farmer gave him a place of nearly 200 acres, most of which was improved under his direct management and supervision. He continued to work at his trade as a carpenter and was also an undertaker in his locality for nearly half a century. He was a member of the United Brethren Church.

"Elmer Ritter grew up on the old homestead in Steuden Township, attended the local schools there, and on moving to Fremont he engaged in the draying business for five years, also sold meat for seven years and then resumed farming for three years. He was appointed to his present duties and responsibilities as postmaster of Fremont May 15, 1916, and has given a most gratifying administration of his office.

"Mr. Ritter is a staunch democrat and served one term as a member of the City Council of Fremont. He is affiliated with the Knights of Pythias and the Modern Woodmen of America, and he and his family are members of the Methodist Church. In 1889 he married Miss Jennie Saul, of Steuben County. Of their two children a daughter died in infancy and the son, Saul C., was born January 8, 1892. The son was educated in the public schools of Fremont and on April 26, 1918 joined the army, being assigned on account of his previous experience, to the post office department and was located at Camp Taylor, Kentrucky. He has recently returned from service and is now assistant postmaster at Fremont, Indiana."

Ford, I. (1980). Noble County from History of northeast Indiana. Knightstown, IN: The Bookmark. 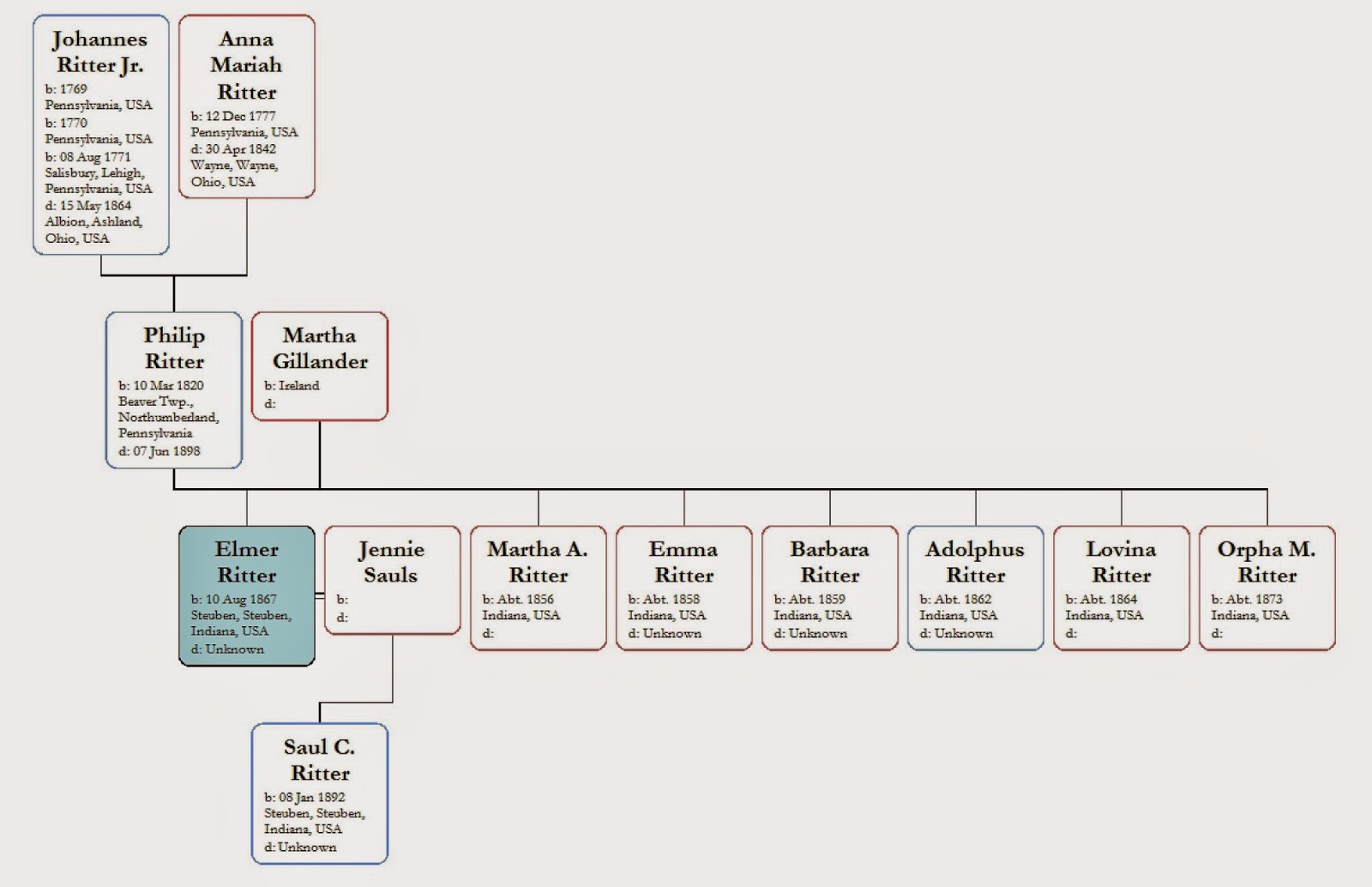 I was very happy to find this reference to my Ritter family on Genealogy Gophers. My blogging friend, Charlie Purvis from Carolina Family Roots told me about the search engine on Genealogy Gophers where you can search 40,000 digital genealogy books. Thanks, Charlie!