My grand uncle, brother of my maternal grandfather, used more than one name in his lifetime, making it difficult to find records for him. There were gradual variations in his name over the years. 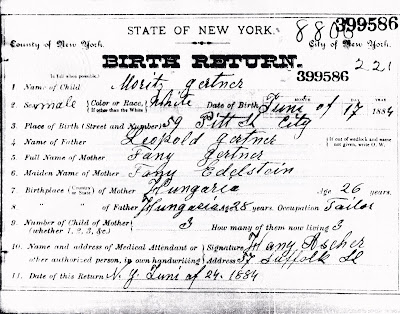 1917. WWI Draft Registration card. My granduncle was now Arthur Moses Gardner. Indicates he was born 15 June 1874. His father was Leopold Gardner and he was working for the Western Union Telegraph Company, so I know it is the correct man. 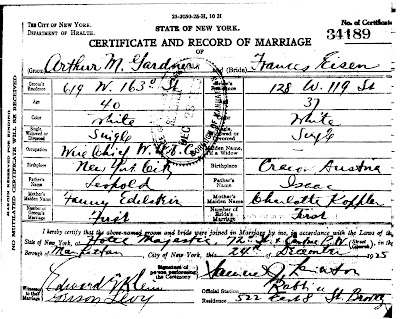 1940. US Census, New York City. Arthur Gardner and Frances lived on Riverside Drive. He was a ‘wire chief’ for a communications company.

1942. WWII Draft Registration card. Arthur Moses Gardner and Frances were still living on Riverside Drive. He was working for the Western Union Telegraph Company on Hudson Street. He indicates he was born 15 June 1884.

1953, May 4. According to Washington Cemetery in Brooklyn he died on May 4, 1953 and is buried under the name Arthur M. Gardner.

The names changes were variations on his original name. He went from Moritz to Moses to Arthur Moses. His surname went from Gertner to Gartner to Gardner. It is easy to see how this could have gradually changed and makes a bit of a nuisance to track him but not impossible.

I had not been able to find a birth certificate for my grand uncle, most likely because I was looking for Moses or Arthur. Recently, Robert Friedman, of Stepsto the Past LLC, went to the New York City Archives and found the birth & marriages certificates for me!

Next up: photographs of his tombstone & a death certificate. 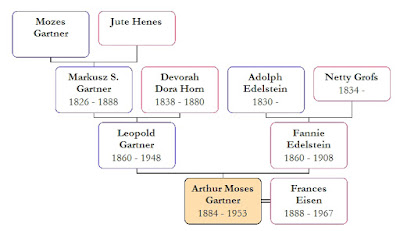