AugustusCeaser Gruissy grew herbs, made herbal medicines, advertised in the newspaper and peddled his wares. One of his cures was called Queen Oil. 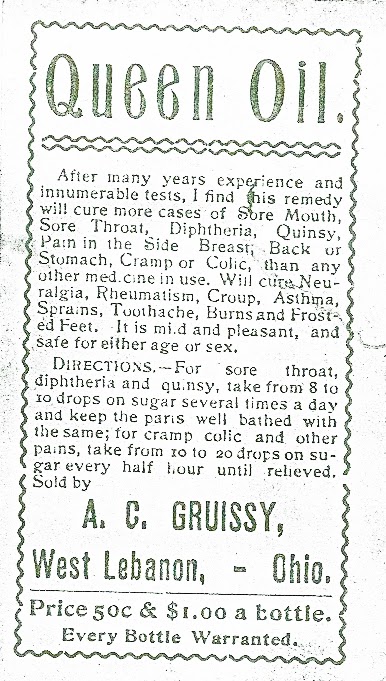 After many years’ experience and innumerable tests, I find this remedy will cure more cases of Sore Mouth, Sore Throat, Diphtheria, Quinsy, Pain in the Side, Breast, Back or Stomach, Cramp of Colic, than any other medicine in use. Will cure Neuralgia, Rheumatism, Croup, Asthma, Sprains, Toothache, Burns and Frosted Feet. It is mild and pleasant, and safe for either age or sex. DIRECTIONS, For sore throat, diphtheria and quinsy, take from 8 to 10 drops on sugar several times a day and keep the pains well bathed with the same; for cramp colic and other pains, take from 10 to 20 drops on sugar every half hour until relieved.  Sold by A. C. GRUISSY, West Lebanon, Ohio.  Price 50c & $1.00 a bottle.  Every bottle warranted.[1]

Augustus was the son of Christian Gruissy & Mary Grorisclauss, both born in Switzerland. Christian married twice & was the father of 11 children. In 1840 & 1850 Christian and family were in Sugar Creek, Stark, OH.[2],[3]

Augustus was married three times. First he married Mary Ann Everett. They were married 21 Feb 1861 in OH.[4] They had four daughters. Family stories say this wife ran off with another man. His second wife was Esther Barbara Wolf, daughter of John Franklin Wolf & Elisabeth Burkholder. They were married 6 December 1868 in OH.[5]  They had five children, two of whom grew to adulthood. His third wife was Ellen, who had been married before. They were married c 1908 in OH. They had no children together.

The Gruissy name is very difficult to research because it is spelled differently in almost every record.

Augustus and family were in the Village of West Lebanon, Paint Twp., OH in the 1870 census[6]. Augustus was working as a carpenter. In 1880 the Gruissy family lived in Wadsworth Township.[7]  Augustus was a peddler. The census report indicated Esther was either “Maimed, Crippled, Bedridden, or otherwise Disabled.”  Five daughters were living at home. Esther died in 1906.

In 1910 Augustus was on Walnut Beach City Road in Sugar Creek, Stark County with his third wife, Ellen J. (Stoner) Gruissy. Augustus was 69 at that time.  He was in the “medicine” trade. He owned a farm. He and Ellen had been married about two years.[8] Augustus died in 1915. Family stories hint that he was killed by his third wife because he was going to change his will to omit her. He was found dead by the wood pile with a stack of wood on his head and back.