I have decided to begin with my grandparents and to work back through the generations. This is the first of my great great grandparents that I will include here, my paternal grandfather’s grandfather. 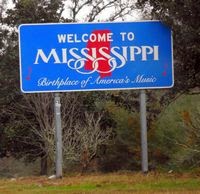 Allen Moses Brown was the son of Edward S Brown & Mary Polly Spurlock. Allen was the oldest of 5 children. His siblings were: Mary Magdelene, Martha M., Adeline V. and James Pascal Brown. They were all born in Amite, MS.

By 1860 Allen’s father had died. Allen & his wife lived with Allen’s mother, Mary. Both Mary & Allen were planters on their farm in Liberty, Amite, MS. Allen’s brother, James, was also living on the farm.[3]

During the Civil War Allen’s brother, James P Brown served as a private in Company E, 22nd Regiment of MS volunteers. James died 5 August 1862 in Baton Rouge, LA. An ‘A. M. Brown’ served in Rhodes’ Calvary. This might be Allen Moses Brown.[4]

In 1870 Allen and Mary were in Osyka where he was a farmer. Their three children were at home: Jasper, Alvira & Mary.[5] This is the last record of Allen. In 1880 Emmaline was raising their children alone.[6]

My grandmother, Ivy Mark Brown, told me a story about Allen. She said Allen was cutting hay one day and got very hot. He went into the river to cool off and he drown. She said Allen's son, Jasper, was about four years old. That timing would be right that he would be in the 1870 census but not again in 1880.

How sad for Allen to be seeking relief from the heat only to drown.

Oh! That's so sad about Allen drowning in the river. His poor wife and children.

Have you tried the local newspapers for an Obituary?

No, Charlie. Thanks for the tip.

Yes it was sad. I don't believe his wife ever remarried either.

Yes. I wonder if there was a strong current or if he went out too far & was not a strong swimmer.