This week’s topic: For Sepia Saturday 199 we celebrate acting and theatre. And dressing up, and silly hats, and daft trousers, and fire escapes, and - anything else you fancy.

This is an easy topic for me. Our oldest daughter, Alanna Pasquale Mensing is an actress. When she was little she loved pulling clothes out of our old trunk and dressing up. She assigned roles to her younger sister and brother and directed their actions.

Alanna has performed in many productions, singing, dancing, doing choreography, playing the piano and acting.

I often drive to Maryland, Virginia or Washington, D. C. for performances. I love watching her on stage.


Hope you enjoyed these family photos & thanks for letting me brag a little! Read more about our actress at Alanna Mensing.


Be sure to go to the Sepia Saturday page and read this week's other posts. 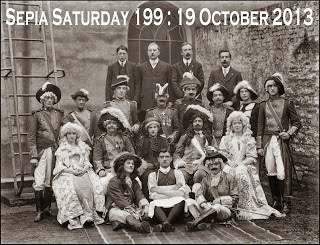 Posted by Colleen G. Brown Pasquale at 7:19 AM