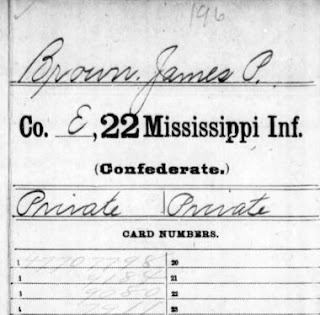 James’ father, Edward S Brown, died when he was a boy. In 1860 James was living in Liberty, Amite, MS with his mother, older brother and his brother’s wife. James was just sixteen. The following year he enlisted in the Liberty Guards.

This company was organized April 25, 1861, and mustered into the State service the same day for 12 months. When a call was made for troops for the war by the President this company was tendered to the Governor of the State as an independent company and was transferred by him to the Confederate service for the war on July 23, 1861.[from fold3]

Dunbar Rowland’s "Military History of Mississippi, 1803-1898 gives the following information on the Regiment:

1861. The men were first gathered at Camp Iuka, MS. On September 23 the regiment reported to General Polk at Columbus, Ky., where they remained until after the battle of Belmont, November 7, of which they were spectators, without being called into action. After this they were ordered to Union City, Tenn., and thence marched to Fulton, Ky., the night of October 1. October 6 they went into winter quarters at Camp Beauregard, in Graves County, Ky., and remained there until Christmas, making several expeditions to Mayfield and Columbus, and once marching in the night to within six or eight miles of Paducah. After Christmas they were moved to Clarksville, and thence to Bowling Green, December 29, where they were in winter quarters.
1862.  The regiment was about 580 strong in January and was brigaded with the Twenty-fifth Mississippi under Bowen. February they were at Nashville the day of battle at Fort Donelson and could hear the artillery.

They reached their old camp at Iuka in March, and after the Federal gunboats appeared on the river below Pittsburg Landing the regiment, under Colonel Schaller, engaged in frequent movements to Eastport. March 26 Schaller reported that his artillery had disabled the gunboat Lexington on the previous day, but he was removing the artillery by order of General Crittenden and would evacuate Eastport that day.

The regiment served in the lines around Corinth during Halleck's siege and participated in the engagement at Farmington, April 27. Upon the evacuation of Corinth, May 29, the Twenty-second and Fifth Kentucky were detailed as rear guard for the left wing and remained on the banks of the Tuscumbia south of Corinth until the evening of June 1, engaged in almost uninterrupted fire with the Federal pickets. Couriers sent to order them back failed to reach them, and they made a night march to Baldwin, June 1, through a country occupied by the Federal outposts, and rejoined the army. They moved from Baldwin to Tupelo, encamped at Kunewa June 12-22, suffering terribly for water, and then joined in the movement of Breckinridge's command to Vicksburg, where they were encamped at Bovina and at Four Mile bridge, picketed the river below the city, engaged in the attempt to surprise the Federal fort eight or ten miles below the city and capture the mortar boats. Being discovered in this movement they were exposed for some hours to a heavy fire from the fleet, including the Brooklyn, and there were several casualties, mainly from falling timber. This service in July, in intense heat, disabled a considerable part of the command. They were witnesses of the naval battle of the ram Arkansas.

July 29 they left Vicksburg under the command of General Breckenridge, and moved to Camp Moore, La., whence they marched to the attack on the Federal force at Baton Rouge. The Twenty-second; greatly reduced in numbers, was commanded in the battle of August 5 by Capt. Felix Hughes, who received a mortal wound at the head of his men leading the brigade in a gallant attack. The casualties of the regiment were: 13 killed and 34 wounded. 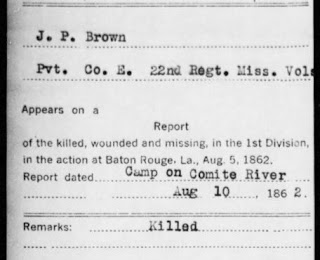 James was killed 5 August 1862, in the action at Baton Rouge, LA. at the age of eighteen.