The topic for the Carnival of Genealogy is: The 5th Annual Swimsuit Edition! Yes folks, it's that time again. It's time to think of summer and lazy days spent at the pool or beach. Dig out those wonderful swimsuit pictures of days gone by and share them with us!


This is my first submission to the Carnival of Genealogy. When I saw the topic is swimsuits two photographs of my mother came to mind: one with her Dad at Coney Island and one as a young woman when she was dating my Dad. The second photo reminded me of the story of a hot summer’s day and how my mother saved my father’s life. 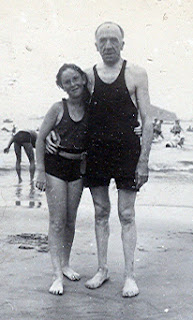 
My mother, Alberta Joy (Gardner) Brown, was born in New York City, the daughter of Nathaniel & Helen (Coyle) Gardner. Early on her parents taught her to enjoy the water & swimming. They took the subway from the Bronx to Coney Island and other parks. My mother told me her father liked to float on his back in the water and read the newspaper. He could do that without getting the paper wet.

My parents met about 1947 after both their families had moved to rural New York State. They liked to go to square dances, to the movies followed by root beers and hot dogs, and on picnics. On hot summer days they would pack a picnic basket with sandwiches, deviled eggs, watermelon slices and a thermos of lemonade, climb in my father’s car and head to a shady park. Sometimes they would meet friends for a fun afternoon. 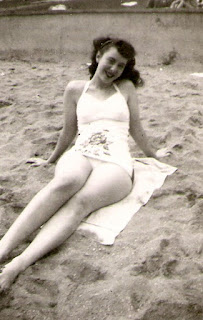 These summer picnics sometimes included swimming. My father was not a confident swimmer. He preferred pools where he could see bottom when he swam. One day my parents went swimming in a lake. They relaxed and talked as they swam. Then my father realized he could not see the bottom. He panicked and began to sink. My mother told me she looked down and saw his blonde hair moving with the water. She reached down and pulled him up. He resisted her efforts because he thought he’d pull her under. She managed to get her arms under him and started pulling him to shore. Others saw their dilemma. People in a row boat came along and pulled him into their boat. They did not think to pull in my mother who was exhausted from struggling with her six foot boyfriend. She did make it safely back to shore. The story has a happy ending with the wedding in 1948 of my parents, Delbert K & Alberta Joy (Gardner) Brown.

Read the other entries into this Carnival of Genealogy.
Posted by Colleen G. Brown Pasquale at 10:06 AM