Mary Cunningham married Michael Coyle (b c 1820) in Ireland c. 1838. They were my third great grandparents in my mother’s family tree. For the longest time that is all I knew about Mary Cunningham.

Death Record
This spring I found Mary's death record. Knowing that Michael and Mary lived in County Cavan, Ireland I browsed through the list of available microfilm records through Family Search. I looked for County Cavan in general and the townland of Moat/Moate specifically. The list was not long. I saw & ordered:

When it arrived at my local Family History Center near Albany, NY I spent a quiet morning, slowly looking through the images on the film. I found long lists of Coyle & Brady death records. Although both these names relate to my family I could not tie any of the specific people to my family lines. However, I carefully copied them into my bright pink spiral notebook for future reference. After copying out five pages of names without specific connections I was becoming disheartened. Then I came across, on page 16, Maria Cunningham! I had not, specifically, been looking for her but there she was. Maria Cunningham of Moat who died 25 January 1848. I wanted to jump out of my chair and shout, but unwilling to disturb the quiet atmosphere, I just smiled to myself and copied her onto the page, highlighting her name in bright yellow! 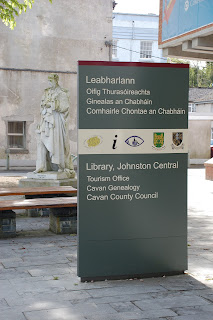 Irish Census
My next Cunningham discovery came during my trip to Ireland in April. Before my visit I had commissioned a genealogist at Cavan Genealogy, Johnston Central Library, Cavan to search for my Coyle family in their records. When my daughter and I arrived in Cavan we met with Concepta McGovern and she went over her findings with me.

You may know that 1901 & 1911 Irish census records can be very helpful. There is also an 1821 census. This census has only limited sections that survive. Undaunted, Concepta searched the 1821 census and found the Cunningham family in Drumlummon, Co Cavan. The Cunninghams & the Coyles were living near each other.

It would be marvelous to find a note in the census records saying, yes, this is your family. However Concepta and I believe this is the same Mary Cunningham who later marries Michael Coyle, has four children and continues to live in Co Cavan for the rest of her rather short (about 38 years) life.

What else can I discover about these Cunninghams?