Independence Day is a time to think of our Revolutionary War Soldiers & our family does have those soldiers. However, I recently found that we also have soldiers from the French & Indian War. AND - John Hollis and his sons served under the command of Col. George Washington, their neighbor. AND - their service is documented in George Washington's papers in the Library of Congress. Exciting! 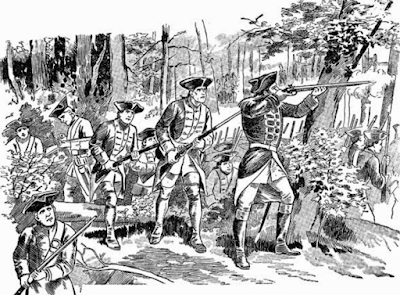 The French and Indian War (1754 – 1763) was a conflict between France and Great Britain to control the American Colonies. Native Americans fought on both sides. North America east of the Mississippi River was largely claimed by either Great Britain or France and between them large areas were dominated by Native American tribes. When conflicts began most of the British colonies mustered local militia companies to deal with Native American threats, generally ill trained and available only for short periods, but they did not have any standing forces. Virginia, by contrast, had a large frontier with several companies of British regulars.[i]

John Hollis and his sons served in the French and Indian War in the Virginia Regiment of colonial forces under George Washington. They served “in the forts protecting the Virginia – Maryland – Pennsylvania frontier.”[ii] John Hollis can be found listed in payroll records between January[iii] and July 1756.[iv] Son, William Hollis, served under Colonel Washington at the Battle of the Great Meadows at Fort Necessity in the summer of 1754.[v] Son, Burr Hollis, served in the “detachment of Militia from Fairfax County under the command of Capt. Bryan Fairfax.”[vi]