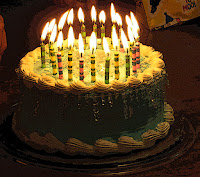 This newspaper account of Caroline's "90th birthday anniversary" includes a list of guests, many of whom are relatives. I have been able to identify a few of those guests.

Celebrated 90th anniversary. Mrs. Caroline [Gruissy] Boerngen, mother of George and Albert Boerngen, of State ave., NE, celebrated her 90th birthday anniversary Wednesday afternoon at the home of the Rev. A. E. Boerngen of State ave., NE. She received many beautiful gifts. A covered dish dinner was served and was followed by a program of vocal and instrumental music, readings and recitations.

The rev. and Mrs. F. B. Hax of St. Paul’s Lutherna church were among the guests. Mrs. Boerngen is one of the oldest members of St. Paul’s church. Mr. Hax held a brief birthday service for his aged parishioner.

The following persons were present:
[My notes on the guests are in green.]

Paul, Ethel and Walter Dannemiller [Ethel, granddaughter of Caroline b 1902]

Gene and Lucy Schneider of Canton

Harry Creasy and Norma Jean Creasy of Beach City [Harry, son of half brother of Caroline]

Thomas Swineford of Canton [grandson in law of Caroline]

Seth Morrison and Margaret Morrison of Creston [Margaret, niece of Caroline b 1861 OH]

Note on Family Chart: The name of Caroline's mother is under further research.