Wentzel
[He was also referred to as Ernest S. Gruissy.]

Ernest owned a gun shop in Beach City, Ohio. My grandmother had told me about a shooting in his store but until recently I could find no verification of that tale. Now I have unearthed two newspaper accounts of shootings there. This is the first. 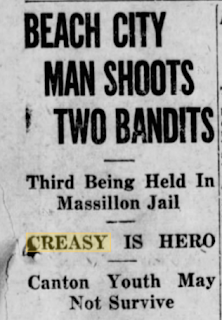 Bulletin. Sheriff Harry Smith, this city was notified by Canton authorities this afternoon that William Zuzeberger, 21, one of the three Canton youths who figured in a robbery and scrape at Beach City last night, confessed to robbing an aged farmer, residing near Strasbrug, Monday evening, taking $5 from their victim. Local authorities were investigating the story this afternoon.

Two of a trio of Canton youths who allegedly attempted to hold up C. E. Creasy, expert marksman, in his sporting goods store in Beach City last night, were in Massillon’s City hospital today, and the third was in jail. Jerome Rothermel, 21, was in critical condition with a bullet wound through his lungs. Glen Infield, 18, was shot through the side. Their companion, William Zuzeberger, 21, was jailed when he took the wounded youths to the Massillon hospital.

Creasy is the proprietor of the Creasy Arms  Company, at Beach City, and is well known over the state for his prowess with shotgun, pistol and rifle.

“Stick ‘em up! We mean business,” one of the three said, as they entered Creasy’s store and all drew their revolvers. Creasy reached over the counter, grabbed Zuzeberger around the neck and jerked his head down on the counter, “kayoting” the bandit temporarily. The other two forced Creasy to release Zuzeberger and step back. They looted the cash register and they demanded Creasy’s pocketbook.

While reaching for the wallet with one hand, Creasy slipped the other hand under the counter and got a loaded 38-caliber revolver. Zuzeberger had recovered his senses. He saw the covert move and ducked. The others started running as Creasy opened fire. Zuzeberger aided the two into an auto and sped away.

Creasy notified Massillon police and then started in pursuit. The three were then taken into custody immediately upon arrival at Massillon City hospital and Creasy’s money was returned. Rothermel and Infield are drivers for a milk company at Canton, according to Sheriff Ed Gibson, Canton and Zuzeberger recently was released from peison after serving a term for robbery. 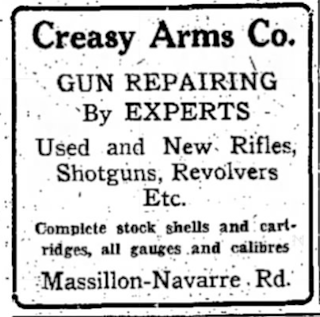 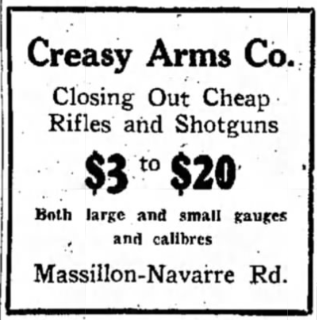 Watch for the blog post about the second shooting.