Reuben B. Creasy of OH & TX 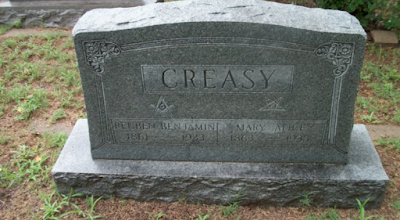 Reuben, who was born in Ohio, moved to Texas sometime between the 1880 and 1900 US Census. He lived in Ballinger, Runnels County, Texas for the 1900, 1920 & 1930 census reports. Those reports tell us he was involved in manufacturing. We know of one son, Bruce Creasy, who was born c 1878 in Texas. The following obituary gives us a little more information about his life. This obituary was published in Ohio where his sister lived. I found no obituary in Texas newspapers.

R. B. Creasy. Mrs. Caroline Boerngen, of 643 State ave., NE, has received news of the death of her brother, R. B. Creasy, of Ballinger, Texas, June 25. Mr. Creasy also is survived by his widow; a son, Bruce, of Ballinger; another sister, Mrs. Lieser, of Missouri; two brothers Phillip and Aaron, of Beach City; and two grandchildren.

Mr. Creasy formerly lived in this city. He worked at the old Doxie mill and later supervised the Warwick mills. He was a member of the Masonic lodge at Ballinger and was engaged in the manufacture of rotary filing machines of which he was the inventor. He was well known throughout the southwest.