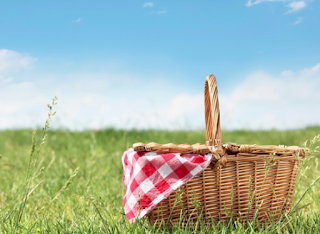 Family Reunion! The words bring to mind images of young cousins chasing each other through a grassy field; women carrying platters of food made with recipes handed down through the family; men talking about days gone by and everyone wondering, "Where has time gone?"

Our Creasy/Gruissy family held reunions in June each year, beginning c 1922 in Ohio. The family is composed of descendants of Christian Gruissy b c 1792 in Switzerland. The family surname has been spelled many different ways. One branch in Ohio used ‘Creasy’.

I uncovered one reunion in Newspapers.com & then searched for more. I searched for several years prior to and after the first clipping and found two more. I was hoping to read about even more Creasy/Gruissy reunions but even these three short clippings are more than we knew once. [Notes in green are my notes, not original to the newspaper clippings.] The clippings follow the photo.

Thanks to new found cousin, Carole Morrison Moser, we have a photo of a family reunion.  Despite being out at a park, the men are wearing ties and the women are in lace collared dresses. At that time this was the norm, not shorts and sneakers as we would wear today. They probably went to church that morning in their 'Sunday best', went home to gather their picnic baskets and platters filled with food, scrubbed their children's faces one more time, and set for for an afternoon in the park with family members they might not have seen since the year before.

Carole Morrison Moser, Sharon Leber Ambrose, Joanne Grace Maurer Leber (Sharon’s mom) and I are working on putting names to faces in this photograph. Hopefully Joanne, who is a generation closer to all these folks than the rest of us, can link names and faces. 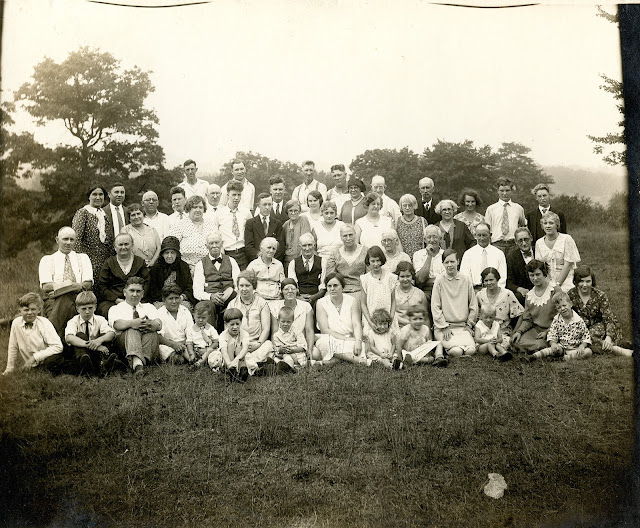 Creasy Family Reunion. The Creasy family reunion was held Sunday at Sippo park with 50 guests present, including Mrs. Caroline Boerngen [Caroline Gruissy Boerngen 1844-1935], the oldest member of the family. Games were enjoyed and a picnic luncheon was served followed by a ball game in the afternoon.

Creasy Family. Mrs. Caroline Boerngen [Caroline Gruissy Boerngen 1844-1935], mother of A. E. Boerngen [Albert E. Boerngen b 1878], of 643 State ave., NE, who is 91 years old, was present at the annual reunion of the Creasy family, Sunday, in Sippo park. Mrs. Boerngen is the oldest living member of the Creasy family, and enjoyed the day. Seventy-five relatives were present from Canton, Akron, Kenmore, Beach City, Navarre, Wadsworth, Medina, Cleveland, Chippewa Lake and Massillon. A picnic dinner was served at noon.

Creasy Reunion. The 13th annual reunion of the Creasy family was held Sunday in Sippo park when a picnic dinner and supper were served and there was a program of sports for which prizes were awarded. The reunion next year will be held in the same place.
Officers elected included Harry Creasy [Harry Lewis Creasy, son of Philip M. Creasy], president; Ernest Creasy [Ernest S. Creasy/Gruissy, son of Aaron Gruissy], vice president; Ella Creasy [wife of Ernest S. Creasy], secretary and treasurer; Ernest Creasy, Mrs. Ellen Halderbaum and William Mann are members of the entertainment committee. 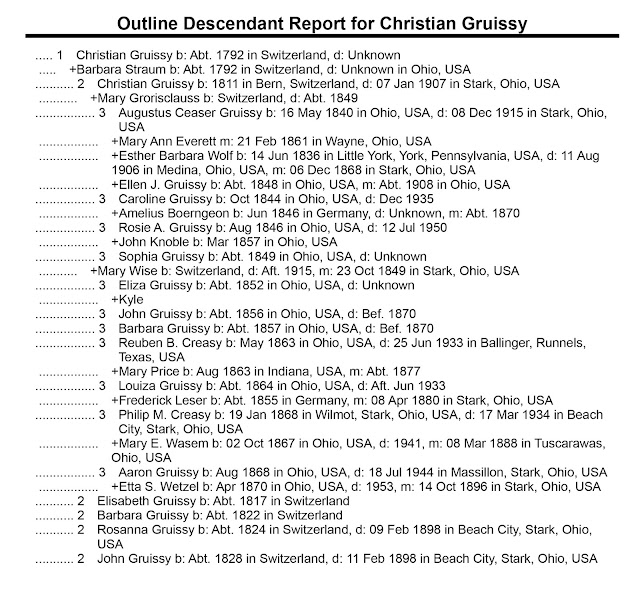 Are you related to this family? I'd enjoy hearing from you!

How fun to have photos and newspaper articles of some choice family reunions. Your reunions sound like ours and makes me feel like summer can't come fast enough!