Edwin is my 3rd great grandfather. 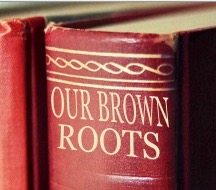 Edwin Barksdale Alford, son of Jacob Alford and grandson of Julius Alford, was born 25 November 1792 in North Carolina. His mother, Elizabeth (Bryant) Alford, died in 1793. His father soon married Frances (Seaborn) Alford.[i] The family soon left North Carolina and moved to Georgia where the family can be found in records from 1798 to 1806.[ii] Jacob moved again, settling the family in Louisiana where they could be found in 1812.[iii]

Conflicts between Great Britain and Napoleon Bonaparte’s France impacted the United States. Both countries tried to block the United States from trading with the other. Great Britain required neutral countries to obtain a license to trade with France. These trade difficulties hurt our economy. At the same time the Royal Navy removed seamen from United States merchant vessels and forced them to serve on their vessels. In 1812 Congress declared war against the British. Many battles followed. In 1814 British troops landed in the Chesapeake Bay area and marched to Washington, D. C. where they burned the White House and the Capitol.
That same year Edwin Alford joined the fight. On 23 December 1814 he enlisted as a private in Captain William Brickham’s Company in the 13th Regiment of the Louisiana Militia. He was a participant in the Battle of New Orleans on 8 January 1815.[iv]
The United States and Great Britain signed a peace treaty on 24 December 1814 in Ghent, Belgium. However, the fighting forces across the Atlantic Ocean did not know about this peaceful resolution and the fighting continued.

On January 8, 1815, the two sides met in what is remembered as one of the conflict’s biggest and most decisive engagements. In the bloody Battle of New Orleans, future President Andrew Jackson and a motley assortment of militia fighters, frontiersmen, slaves, Indians and even pirates weathered a frontal assault by a superior British force, inflicting devastating casualties along the way. The victory vaulted Jackson to national stardom, and helped foil plans for a British invasion of the American frontier.[v]
In February 1815 news of the peace between the United States and Britain reached the fighting troops. Edwin was honorably discharged soon after. Edwin received land for his service. Bounty land warrant #75733 gave him 40 acres[vi] and #33939 gave him 120 acres in Louisiana.[vii]

Pike County, Mississippi was originally the home of Chickasaw, Choctaw and Natchez Indians. The Spaniard Hernando De Soto came from Cuba in 1539 to explore the area. The land passed from the hands of the French to the English to the Spaniards and to the United States. In the early 1800s it was Marion County.[viii]

At this period the county was comparatively an unbroken wilderness with but few inhabitants who had been lured by the thoughts of adventure to abandon their homes in the older States of Georgia, South Carolina, North Carolina and Tennessee, and with their families and transportable property, penetrated the depths of this wilderness as pioneers, to begin the foundation of new homes and a great State government.[ix]

Why did Edwin Alford leave Louisiana for Mississippi? Was Edwin looking for adventure? He was in his mid twenties and single when he crossed the border into Mississippi. Had he heard about the abundant resources of the area?

The river and creek bottoms were covered with a dense growth of wild cane and the pine hill regions with a wild pea commonly known as partridge pea, beggar lice and other rich vegetation and grasses, affording magnificent pasturage for horses, cattle, sheep, goats and hogs; and the swamps with mast-producing trees, and the streams abounding with an inexhaustible supply of fish. Wild deer, turkeys, bear, wolves, panthers, cats, coons, opossums, beavers, otters, squirrels and the numerous feathered tribe for game were practically inexhaustible.[x]

This area was, at first, Marion County, which was divided on 9 December 1815 to form Pike County. On 10 December 1817 Mississippi became the 20th of the United States and the Indian lands were opened to white settlements. This available land may have been the lure that attracted Edwin Alford from Louisiana into Mississippi.

Edwin was described by his grandson Walter Edwin Tynes as being remarkably strong in character and "one of the most practical and industrious men I have ever known." Walter related how his grandfather had begun his life as a poor farm boy, working for a neighbor clearing land to put in cultivation and how he gradually began purchasing land and buying settlements from "improvident neighbors" until he had acquired some three or four thousand acres and some twenty or more Negro slaves. Walter said his grandfather worked from twelve to fifteen hours a day, had the best library of any man in the country at that time, was remarkably well informed, and was a very public spirited citizen."[xi]

On 20 December 1818 in Pike County, Mississippi, Edwin married Martha P. Smith[xii], daughter of Jeremiah Smith and Joanna Dillon. [See Smith Chapter for more information on this family.] Martha, born 25 March 1802[xiii], was 16 years old. The marriage of Edwin and Martha is the earliest record of their life in Mississippi. Two years later he was one of four Alfords enumerated in the 1820 census. He was in Pike County with a wife and young son.[xiv]
Early home life in Pike County was “simple and natural”.

The young husband, with his axe on his shoulder, his clear sounding horn swung to his side, with his ever attendant faithful dog, went about his duties with self-confidence and a buoyant heart. The young wife, with rosy cheeks, a loving smile, a happy heart, made the little home an Eden of joy and gave strength to his soul in the battle of life. They drank from the sweetest and most sparkling fountains the inspirations that cement marriage bonds.[xv]

Life for Edwin and Martha was probably not as idealized as the description by Luke Ward Conerly. However, the couple did prosper as evidenced by the value of his personal and real estate in census reports. Mr. Conerly’s book includes a photo of the “Alford Bridge over the Bogue Chitto River in the northern part of Pike County.” Mr. Conerly describes Edwin Alford as “one of the finest mechanics of his time.”[xvi]
In 1841 and 1845 Edwin was included in the Mississippi State census for Pike County.[xvii] In 1850 the United States Census shows Edwin as a farmer in Pike County whose real estate was valued at $2,000. He was living with his wife, Martha, and five of their children. Sons, Jeptha Josephus Alford and Seaborn S. Alford, were helping to work the farm.[xviii]
While they lived in the Progress and Simmonsville area Edwin and Martha were surrounded by family. Their neighbors included their son, Julius Newton Alford, Martha’s brothers, Wyatt Smith and Calvin Smith and distant relatives of the Fortenberry family.[xix] In 1840 there were 19 Alford households in Mississippi and in 1850 there were 45.[xx]
In 1860 Edwin’s real estate was valued at $3,000 and his personal estate was valued at $30,000. Son, Julius Newton Alford, was living at home and working as a teacher. Daughter, Martha Elizabeth (Alford) Brumfield [then single], was also living at home.[xxi] Edwin owned 28 slaves in 1860, ranging in ages from one to 45 years old.[xxii]

One of Edwin's ex-slaves Barney gave an oral narrative in 1930, which became a matter of record. It described his life as a slave on the Alford plantation. Barney gave a good description of the old home place, which he said was near the Louisiana State line on State Line Road. He described the house as big and being built of logs, which were in later years covered with planks. Barney said the house was like two houses put together with a big open hall and a shed room on both ends of the galley. It had brick chimneys, glass windows and a front porch. The plantation had mules, goats, cows, oxen, chickens and horses. Barney stressed that after the slaves were freed at the end of the Civil War many (but not all) chose to stay at the Alford plantation.[xxiii]

In 1870 Edwin Alford was 77 years old and living alone in Osyka, Pike County. His son, Julius Alford, lived next door with his wife, Mary and two children.
Edwin died 10 March 1878. He and his wife are buried in the Edwin B. Alford Cemetery. The cemetery is a mile and a half southwest of Silver Springs Baptist Church and less than a mile north of the Louisiana border.[xxiv]
Edwin and Martha were the parents of a dozen children, all born in Pike County, Mississippi: Warren Jackson Alford, Cynthia Ann (Alford) Ball, Ira Payne Alford, William Harmon Alford, Harriet Jane (Alford) Tynes, Lacey A. (Alford) Ball, Jeptha Josephus Alford, Julia Ann (Alford) McEleveen, Seaborn S. Alford, Elijah Hayden Alford, Julius Newton Alford and Martha Elizabeth (Alford) Brumfield. “Edwin Alford was the progenitor of many present day Alfords."[xxv] 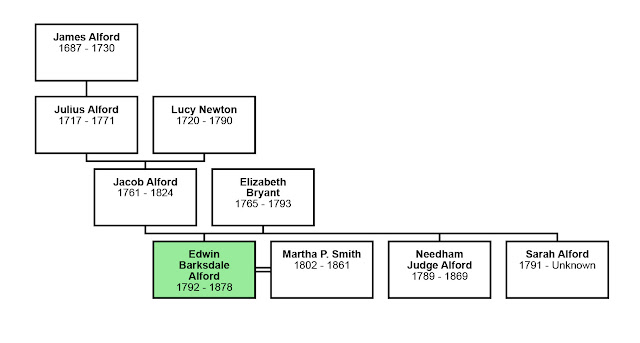