Contents:
Part I: The Constant Patterns of Women’s Lives
1.       The Small Circle of Domestic Concerns
2.       The Important Crisis upon Which our Fate Depends
3.       Fair Flowers, If Rightly Cultivated
4.       In What Wou’d You Shew Your Activity?
5.       As Independent as Circumstances Will Admit
Part II:
1.       We Commenced Perfect Statesmen
2.       Necessity Taught US
3.       A Reverence of Self
4.       Vindicating the Equality of Female Intellect
Conclusion: A New Era of Female History
Abbreviations
Glossary
Essay of Major Families and Sources
Essay on Sources
Chapter References
Index 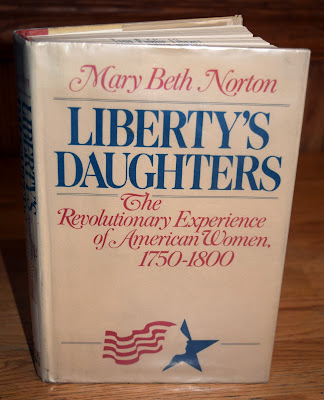 Many of us can trace our family back to the Revolutionary War. We research the service records of our male ancestors but what happened to the women during this time? Many were as brave and as strong as their husbands and brothers. If my female ancestors left journals or letters about that period in our history, I have not found them. In this book Mary Beth Norton quotes the diaries and letters of many women from various parts of our country and from various social backgrounds to paint a picture of those hard times. Here are a few quotes from the book.

Mary Beth Norton begins her book with a look at the family structure in the times before our war for independence.

“The household, the basic unit of eighteenth-century American society, had a universally understood hierarchical structure. At the top was the man, the lord of the fireside; next came the mistress, his wife and helpmate; following her, the children, who were expected to assist the parent of their own sex; and finally, any servants or slaves, with the former taking precedence over the latter.” [page 3]

During the course of the war this hierarchy would not tumble but it would be questioned. Before the war women were expected to take second place to their husbands. “She was expected to follow his orders, and he assumed control over the family finances.” [page5]

“Rural wives were often unable to place a precise value on tools, lands or harvested grain, even if they knew a farm’s total acreage or the size of a harvest. Urban women frequently did not know their husband’s exact income or the value of the houses in which they lived. .” [page 6]

We need to look beyond the battles to get a clear idea of how our female ancestors’ lives were changed during this time.

‘Most narratives of the revolutionary War concentrate upon describing a series of pitched battles between uniformed armies. Yet the impact of the conflict can more accurately be assessed if it is interpreted as a civil war with profound consequences for the entire population. Every movement of troops through the American countryside brought a corresponding flight of refugees, an invasion of epidemic disease, the expropriation of foodstuffs, firewood, and livestock, widespread plundering or destruction of personal property, and occasional incidents of rape.’ [page 195]

‘The disruption of normal patterns of life that resulted from all these seldom-studied aspects of the conflict had an especially noticeable effect upon women, whose prewar experiences had been confined largely to the domestic realm. With their menfolk away serving in the armies for varying lengths of time, white female Americans had to venture into new fields of endeavor. In the midst of wartime trials, they alone had to make crucial decisions involving not only household and family but also the ‘outdoor affairs’ from which they had formerly been excluded.’ [page 195]

Where our families lived also affected their experiences of the time.

‘What distinguished the war in Virginia, Georgia, and the Carolinas from that in the North was its length and ferocious intensity. From the invasion of Georgia in 1778 to the ratification of the peace treaty in 1783, the South was the main theater of war, and there [sic] battles were not confined to the formal clashes between armies that characterized the northern phase of the conflict. A prolonged guerilla war, coupled with sporadic nonpartisan plundering and wanderings of the British army through North Carolina and Virginia in 1780 – 1781, left much of the South devastated.’ [page 208]

After the war the roles of men and women in America were changed.

‘The war … dissolved some of the distinctions between masculine and feminine traits. Women who would previously have risked criticism if they abandoned their ‘natural’ feminine timidity now found themselves praised for doing just that. The line between male and female behavior, once apparently so impenetrable, became less well defined.’

Find this book at your library if you’d like to learn more about Liberty’s Daughters.

Note: This is one of several books recommended to me by Michael Aikey who lectured at our local community college. The topic of his lecture was ‘Women in War’ and the reading list he shared included books related to several wars.

Thank you, this is wonderful! It's so important to add historical context like this to the lives of our ancestral ladies!!!