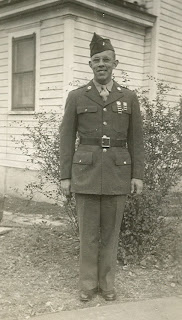 
Received your letter. Was a bit surprised to hear you had a 10 lb. Boy. You certainly have a nice family. You have a Basket Ball Team of Boys all your own. Kids are nice to have on hand when you are older I guess. Never thought much about it. The folks were riding Bee because she has a Dog and no Kids. So she doesn’t go home much anymore. What was it to them, after all I am in the army! The same old lady will never learn. She is jealous as well. Bee likes Dad a lot and likes to take them Places if only Mom would be still. However this is between us, Remember the fun we had as Kids? I was a mean Brat! But you never told on me Like the other girls when Bill and I would get into a fight or something. I still can’t remember or picture you as a silver haired lady. I like to Remember you as I remember you I guess, blond, blue eyes, always seeing the funny side. I figure on seeing you all and those Beautiful Catskills and rivers (They say). I am just gonna sit in the Sun and see who can spit the farthest. The way I feel now, I’d make a perfect Bum. How’s Roy? Never hear about him. Wish I had a bottle of whiskey like he used to get. Well keep your chin up and I Hope you’re feeling Great, Owen.

Received your letter of Aug, 23/44 recently. It must have taken one heck of a time to get out of those Rip Van Winkle Hills. Glad you and Isabell had a Good visit. I Frankly was worried about you. I heard some rumors you were ill and so was Billie. Hope you’re doing fine. Guess Billy is on his first Legs by now. Yes, Bee is OK. Proof – she can’t stand Mama but loves Daddy and he is OK. You said it, he is Tops. I am fine and living good. But want to see the states. I kinda like to see you all and the hills when I can. Will win the war on this side one of these Days. I got it all figured. It will be sudden and surprise most of people when we do. For Heavens sake look at my address. The last few times and your Box were to a very old address. I have had 3 APO’s since the address you had. But write if it’s in care of RFD. Your box was very welcome and I thank the Brownies for it. I write to Harold every week But haven’t got together yet. I wonder what’s gonna happen when we come home. Things aren’t gonna be smooth. How’s Clarence? I wish he had got in medics here rather than in the hospital in the states. But he is safe anyway. That’s a lot. Well must close and Love to you all – Owen.
Posted by Colleen G. Brown Pasquale at 8:24 PM