Two Obituaries for one Man with Varying Facts

My Great Uncle, Brother to my grandfather, Roy Jesse Brown

These two obituaries have minor differences. The second tells us Junius was a carpenter and gives two residences for him: Clarkston, Washington & Kellogg, Idaho. The first gives a location for his widow and the second gives a more exact location for one son.

Junius was one of nine children and both obituaries give incorrect information concerning his siblings. The informant must have given the wrong data to the newspaper.

Searching through Find A Grave, I found him at Greenwood Cemetery, Kellogg, Shoshone, Idaho. Memorial #73134214. The stone has his name but no dates. The memorial had no information except a photo of the very worn stone. I left some brief information.

Brown Service Set Tomorrow.Kellogg, Idaho, Jan. 13 – Funeral services for Junius E. Brown, 61, who died Tuesday at Spokane will be held tomorrow at 3 p. m. (MST) from McGlade chapel in Kellogg. Burial will be in Greenwood cemetery. Survivors include his widow, Ora, at Rose Lake; two sons, Joe, New Orleans, and Everett, Tennessee; one brother and a sister. 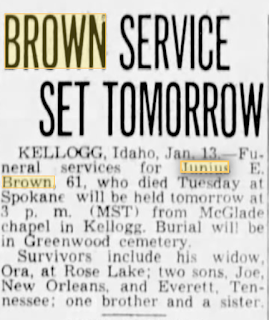 Funeral is Today for Former Resident.Kellogg, Idaho, Jan. 13 – Funeral services for Junius E. Brown, 61, retired Clarkston, Wash. Carpenter and former Kellogg resident, who died in Spokane Tuesday, will be held in McGlade Chapel here at 3 p. m. Friday and burial will be in Greenwood cemetery. Brown’s survivors include the widow, Ora; two sons, Joe in New Orleans and Everett, Alko, Tenn., one brother and two sisters. 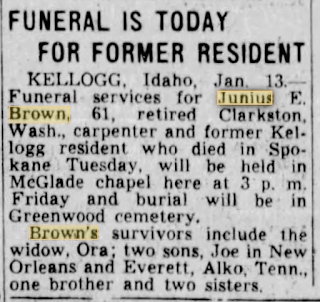 If you know more about Junius, please contact me.