One of Clonmel’s oldest and most respected inhabitants passed away this week in the person of Mr. Daniel Mullane, Upper Gladstone street, whose death occurred on Tuesday. He had been in indifferent health for some months past, but not until about a month ago did his illness assume a more acute form. A native of Kanturk, Mr. Mullane came to Clonmel when he was a young man and entered the coach-building trade. He subsequently set up in business in Gladstone street, where, under his careful guidance, a lucrative trade was built up. His death, at the great age of 92 years, has severed a link with a past generation and much sympathy is felt with the members of the family in their bereavement.The remains will be removed to SS. Peter and Paul Church this (Wednesday) evening at 8 o’clock, and the funeral will take place to Newcastle to-morrow at 1:30. 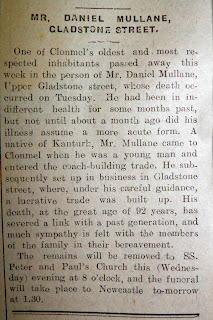 During my recent trip to Ireland a gentleman in the National Archives in Dublin suggested I visit the South Tipperary Archives, Carrigeen Business Park, Clonmel. He said I might find voters’ lists and burial records there. The archives is open by appointment only and I missed the opportunity to visit in person. However, I have been in contact with the archivist, Róisín O'Grady B.A., M.Phil., H.Dip.A.S. The very first thing she found for me was this obituary for Daniel Mullane, my great – great grandfather. Home again but my trip continues to pay off.