Do YOU still get Excited about Genealogy?

As our family’s historians we turn the pages of old books in libraries, walk through almost forgotten cemeteries and scroll down long lists of names on websites. We take notes on index cards or notebooks or laptops. Our knowledge slowly grows one name, one fact at a time.

Do YOU still get excited or is your research just the usual routine? When I first learned I could find out information about my family I was very excited. I shared my discoveries with my family, my friends, with anyone who was unfortunate enough to sit beside me. (Ha!) I was excited and I wanted to share that excitement. Are you still that excited about your discoveries? 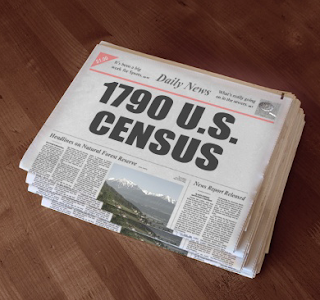 I recently decided to focus my research on the First US Census. This was the very FIRST US Census, approved on 1 March 1790 to count our early inhabitants for the purposes of taxing each state and paying off the expenses related to the Revolutionary War. On the first Monday in August the US Marshals mounted their horses and started on their nine-month task. The marshals and their assistants traveled through every county, town and city in the new country. I can picture those men on foot or horseback crossing streams and mountains, following earthen paths and avoiding dangerous animals to seek out the strong, independent early settlers of our country. The census takers were educated men who could read and write. They were organized and resourceful.

Did those early census takers walk into the home of your ancestors? In Jones County, North Carolina they walked into a home on the north side of the Trent River on the Black Swamp.  It was the home of Edward Brown, my fifth great grandfather. He was sixty years old and had seven other people in his household.

That excites me. Those first census takers, who were sent out across our country by our founding fathers stepped into the home of my 5th great grandfather, sat down on a chair or a bench and spoke to the man whose surname I share.  Two hundred and twenty-eight years later, I am excited that my family has a little connection to history!

I will continue to go through my list of ancestors to find others who were visited by those first census takers. And as I learn those names I will share. Be careful if you plan to sit down next to me.

What excites YOU about your research?

Colleen, I'd be excited too if I had an ancestor I could find in the 1790 census! (Mine came to America later.) But it's always exciting to make a new discovery of a cousin, for instance, or get one generation back by locating a maiden name. Happy ancestor hunting.

When I find a story about an ancestor, which does not happen often. One lived to old age & when asking for people who had fought in the Battle of Waterloo, he emerged & that's why I know he was there & in Russia with Napoleon. Another ancestral couple was locked up in a castle dungeon for complicity in selling stolen items & they were likely the ones who where set free. Another ancestral couple was hanged for it. Those are the interesting stories, but they are hard to find.

Finding a maiden name once got me excited, too, for it resulted in a few extra generations. Usually that's not a bother in The Netherlands, for there women still used there maiden name, but if you go back far enough, married women often did not use a surname, so there the problem is the same as in the USA.

Yes, I have many names in that first census. I often wonder what our descendants will learn. In recent times the census questions have not been interesting.

Joan, those stories are great reasons to get excited about genealogy! I'm sure your family must enjoy learning those stories. Great research on your part!

Marian, I agree that moving back a generation in our research is Exciting! I haven't done that in a long time. Maiden names & new cousins are also reasons to be excited about research & family. You have great research skills and your exciting results must keep you motivated. Thanks for your comments here, today & always.

I really enjoyed this post, Colleen, and the imagery of those first census takers traveling through what may have been wilderness to find every citizen of the U.S. I don't think I have ancestors who were in the U.S. for that first census but I have one line with ancestors who may have come earlier. I have more research to do.

Yes, I still get excited about genealogy. Finding one more child, one more parent, and finding documents to support the relationships are all exciting to me. And newspaper articles! I love finding my ancestors in the news!

Nancy, I agree that those newspaper articles, supporting documents & new family members get me excited! It is great that we can still be thrilled with what we do.