In this edition of the Era Leader, Charles is mentioned three times. First, the newspaper wrote that Charles' health was improving. In the next paragraph his death was reported.

June 5. Mr. C. D. Ott who has been very sick for the past week we are glad to hear this morning is much better.

June 15. Hon. C. D. Ott died at his home last Friday at six o’clock after an illness of two weeks. The remains are buried in the Cemetery at Mt. Hermon Baptist Church last Saturday evening with Masonic honors, Rev. J. A. McCormack conducted the funeral services. A history of his life will be given later.

Mr. and Mrs. M. W. Ott attended the funeral of their uncle C. D. Ott at Mt. Hermon Saturday and remained over with the family thru Sunday. 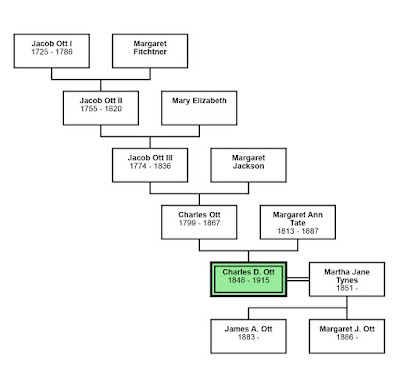 A month later a lengthy memorial was written summarizing the life of Charles Ott.

In memory of Charles D. Vieman Ott, who died at his home near Mt. Hermon, June 11, 1915. The subject of this sketch was born on the 8th day of April in 1848 on the old Ott homestead in the Mt. Hermon neighborhood, though long before the community received its name. In his boyhood years there was but little in his life materially different from other boys; raised on the farm, however, there were some characteristics in his early life that marked him from most boys. One of them especially worthy of mention was that he would never tell a lie in his youthful escapades on the farm. When our mother wished to know the truth she would always ask “Vee”, as she always called him. He neither swore, used slang, drank whiskey nor used tobacco.

The greater part of his education he received at the old Mt. Hermon school house. It was during his early school days that he began to show great mental capacity, for he easily outstripped all of his classmates in their lessons, being especially bright in mathematics. He was of a studious disposition, widely read, and was known as one of the best historians in the country.

In his studies he was associated with Rev. W. E. Tynes, another very brilliant young man of the country, and from this a strong friendship grew up that has lasted throughout the years. In his young manhood he became very much interested in the political affairs of the country, having come to his majority about the time of the reconstruction when his state, Louisiana, was struggling to get free from carpet-bag rule. He became a staunch Democrat and was allied with the leading politicians of the parish and state. He was elected to the Constitutional Congress of 1879 and though among one of the youngest members of the convention, his work was highly praised by the members of that body and the leading journals of the state. He always sought the intellectual life, and was a member of the old Pickwick Club which was composed of the brightest light of the country, such as Judge T. E. Tate, Dr. J. J. Alford [Jeptha J Alford, 1830-1994], Rev. J. English, Dr. H. Pierce, and later Edward J. Young, a very learned man who came to the community as a teacher. At the meetings of the Club the world, social, political and religious history would be debated and “Charlie”, as he was always called, learned to hold his own with these men of letters.

In the spring of 1870 he graduated in book-keeping in Dalbars Commercial College. The day he was offered a lucrative position as book-keeper for a very large and wealthy mercantile company, but preferred to stay on the farm.

On April 26, 1882 he was married to Miss Mattie J. Tynes, daughter of Mr. and Mrs. T. J. Tynes of Mt. Hermon. This was a culmination of a romance begun at the old Mt. Hermon school house, a school house where many romances were begun in youth and ended in happy marriages.

Though he never joined any church, he was a firm believer in the Cardinal teachings of the Bible. He joined the Franklinton Masonic Lodge when quite young, was a Past Master of the Lodge, and was a member of the W. O. W. Kentwood Camp.
In the later years of his life he was surveyor and timber buyer and estimator, was vice-president of the Farmers’ Bank of Osyka, Miss., and to him is credited the saving of that bank from collapse and placing it under the guarantee law.

He was a just, safe counselor and his advice was sought on almost all questions that came up in the community. He will be sadly missed among the people with whom he lived. – A Brother