attendance at the reunion. I had not known that a couple of these men were veterans. From here I will go to fold3 to find their service details.

My photograph from Manassas Battlefield
The annual reunion of Stockdale Camp Confederate Veterans of Pike County, was held in the city hall in McComb Wednesday, June 23, with General W. M. Wroten presiding. “Dixie” was sung by the United Daughters of the Confederacy, with the invocation by Rev. J. L. Sells. Misses Dorothy Brumfield and Nellie K. Holmes of the Children of the Confederacy, gave an exhibition of fancy dancing. Miss Mary Margaret Fugler gave a reading. The welcome address was given by Major Dean C. Holmes, who in an eloquent manner made the Boys in  Gray feel welcome to the city. P. J. Albright welcomed the visitors on behalf of the  local Sons of Veterans. Dr. W. P. Price, pastor of the Magnolia Baptist Church, responded, paying tribute to the soldiers of the South. Following this, General Wroten made general announcements and business of the camp was attended to.

W. W. Grant, a veteran from Crystal Springs, gave some interesting incidents of the war, dealing more especially with Howard Divinity, 94 year old Negro, of Copiah County, who went through four years of war with his master.

The veterans then assembled in the basement of the Centenary Methodist Church, where a splendid dinner was served by he local chapter of the Daughters of the Confederacy. Mrs. D. A. Brumfield, president of the local chapter, welcomed the visitors. Miss Thelma Stewart, with the Violin, accompanied by Mrs. Beverly Dickerson, entertained by music. Readings were given by Miss Sue Fay Nall and Grace Allen. Josephine Stanton, president of the state organization of Children of the Confederacy, responded to the welcome. Rev. J. H. Lane and F. D. Hewitt made brief remarks.

Following this, the memorial service, honoring departed members, was held, with Mrs. W. T. Stuart in charge. “Blest Be the Tie that Binds” was sung by the Daughters of the Confederacy, after the invocation, by Dr. J. W. Mayfield. Bruce Benson gave a reading, “The Man We Can Never Forget,” a tribute to Woodrow Wilson.

The resolution endorsing the sale of Confederate memorial coins passed at the session one year ago was readopted. A letter was sent to the absent Rev. J. M. Hutson, as follows: “Stockdale Camp, Confederate Veterans of Pike county, in annual reunion assembled, hereby express to you our sincere regret that you are unable to be with us this day. We trust you will soon be well and about again. As our faithful chaplain, we miss your presence among us.”

In closing the reunion, General Wroten said it was one of the best meetings ever held by the camp. “It has been just like a state reunion,” said General Wroten. The Local U. D. C. and people of McComb were thanked for heir hospitality and entertainment.

A feature of the afternoon was the presentation of a flag by the camp to Mrs. W. T. Stuart. Dr. Wroten, in making the presentation, said the camp had ordered a large flag to present to Mrs. Stuart but that it had not yet arrived. In lieu thereof he presented a small Confederate flag.

The camp voted to send five dollars to Howard Divinity, 94-year-old Negro of Copiah County, who fought in the Confederate army and who is now blind. 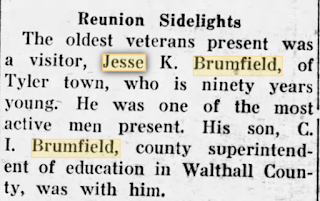 Reunion Sidelights
The oldest veteran present was a visitor, Jesse K. Brumfield, of Tyler town, who is ninety years young. He was one of the most active men present. His son, C. I. Brumfield [Claude Isaac Brumield], county superintendent of education in Walthall County, was with him.