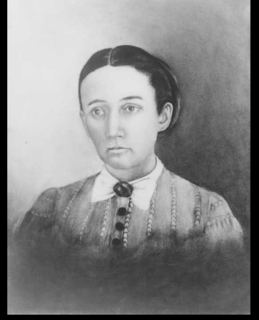 This is to certify that Sister Sarah M. Brumfield was a member of Newhope (sic) Baptist church in good standing and in full fellowship with said church at her death. And as it has pleased God in his divine providence to take her away from us, we must submit, as we know that God’s will must be done. But we feel the loss of Sister Brumfield, as she was a faithful member and we believe a Christian, as she was always willing to give a helping hand to anything pertaining to the welfare of her church, or the building up of Christ’s kingdom. Sister Brumfield was born in Pike county, Mississippi, December 10, 1849, and died February  24th, 1892, age 42 years, 2 months and 14 days. Sister Brumfield was the daughter of Ephraim and Talitha Prescott, of Pike county, Miss. After Sister Brumfield became grown she commenced thinking under the preaching of the Gospel about her future destiny, and after due consideration she became convinced that she was a sinner in the sight of God, and at length she joined Silver Creek Baptist church in August, 1867, and was baptized and received into the fellowship of said church by Elder B. H. Crawford, who was pastor of the church at that time. After several years Mr. J. M. Brumfield, Sister Sarah’s husband, moved to Amite county, Miss., on the east side of the Amite river, where he now resides, and Sister Brumfield being some distance from her church moved her letter to Newhope (sic) Baptist church in Amit4e county, near her residence, on the 5thday of June, 1886, where she remained a faithful member and a Christian until her death.

We the members of Newhope (sic) church feel the loss of our departed sister and we further extend our sympathy in behalf of our worthy friend J. M. Brumfield and his dear children, as he has been bereaved of a kind and affectionate companion, and his children of a kind and lovely mother. Sister Brumfield was loved by her neighbors and all who knew her, was kind to the sick, and we believe is now resting with Jesus in that promised land, and hoping the help of our Heavenly Father that our bereaved friend J. M. Brumfield and children may become prepared to meet her there when they come to die are our prayers, amen.

Sister Brumfield left a husband, ten children, a mother and sisters, a brother and relatives to mourn her loss. May the Lord bless them and save them for Christ sake. Sister Brumfield’s funeral services were conducted at her home by Elder J. H. Lane, and she was buried at the family grave-yard on Mr. J. M. Brumfield’s place.