My Great Uncle
Brother of my Grandfather Roy Jesse Brown 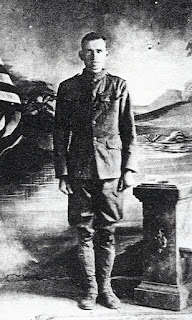 Hubert Allen Brown was born 1 October 1894.[i]He grew up in Pike County, Mississippi where he attended the local schools.[ii],[iii]
The World War I draft registration card described him: “medium height, slender, gray eyes, brown hair.”[iv]We know he served during the war because he indicated he was a world war veteran on the 1930 census, we have photos of him in uniform and his tombstone tells us he was a private in the US Army. At this time there are no details about his service. Three of his sons would serve in the U. S. Navy when they became adults.
In the 1920 census Hubert was 24 years old, living with his parents in Simmonsville and working on the farm.[v]
He married Freddie Beatrice Smith on 10 January 1920.[vi], [vii]She was the daughter of Elvin Dennie Smith and Nancy Cordelia Smith. Freddie’s brother, Herbert Smith, married Hubert’s sister, Mavis Marie Brown. Hubert and Freddie’s children were: Borden Hamilton Brown, Fred Allen Brown, Thiry Yvonne (Brown) Fegan, Lynn Holly Brown, Hugh Frances Brown and Peggy L. (Brown) Alford.[viii]
In 1930 Hubert was a farmer on a general farm. He and Freddie were married ten years and had three children: Borden, nine years old, Fred, six years old and Thiry one year old.[ix]Two years later another son was born. Lynn Holly Brown was born 22 January 1932.[x]Unfortunately the family also had a death in 1932. Eight year old, Fred Allen Brown, died on 13 July 1932. He is buried in the Silver Creek Baptist Church Cemetery.[xi]
The family lived on Walkers Bridge Road in 1940. Hubert and Freddie had five children at home: Borden, 19; Thiry, 11; Lynn, 8; Hugh 6; and Peggy, 2 years old.[xii]The children attended school in Pike County and are listed in several school census reports.[xiii],[xiv]Despite the loss of Fred, there must have been happy days in 1940 when Hubert and Freddie had their remaining children at home with them. Soon war would change the world and Borden would be in danger.
Their oldest son, Borden Hamilton Brown, served in the U. S. Navy during World War II. He enlisted 1 September 1942 in New Orleans. On 1 December 1942 he first boarded the battleship U. S. S. Nevada where he would serve throughout the remainder of the war. He served as coxswain until 24 December 1946. In February 1946 he spent a 35-day leave with his parents.[xv]In December he returned home and his return was reported in the newspaper.

Borden Brown Cox, arrived home Wednesday. He has been in the Navy four years and will receive his discharge in 60 days. Coxswain Brown is the son of Mr. and Mrs. Hubert Brown.[xvi]

Mr. and Mrs. Hubert Brown and daughter, Thiry, were the guests Sunday of the Herbert Smiths.[xvii]

A March 1948 newspaper mentions Thiry as “employed in Baton Rouge.”[xviii]In November 1950 Thiry Brown appeared in the newspaper again, when she was living in Baton Rouge, LA and visited her parents.

Lynn, like Borden, joined the U. S. Navy. In October 1953 he returned home for a visit. All three brothers would eventually join the Navy.

Lynn Brown of the U. S. Navy is spending a few days with his parents, Mr. and Mrs. Hubert Brown.[xix]

By December 1954 Thiry Yvonne Brown had married Robert Fegan. She visited her parents and was surprised by a shower in her honor.

The home of Mrs. Hubert Brown was the scene of a delightful surprise shower Saturday night, December 11, in honor of her daughter, Mrs. Thiry Fegan of New Orleans, LS., who was visiting her mother. A delectable salad was served to a host of guests.[xx]
As older daughter, Thiry, was living in New Orleans and getting married, their younger daughter, Peggy was in school. In December 1955 her mother acted as hostess to many members of her class, some of whom were relatives.

Miss Annie Laurie Lawrence, 121 James St., was married Christmas Eve night at 7 o’clock in a ceremony of simple beauty to Borden Brown of Progress. The new Mrs. Brown is the daughter of Mr. and Mrs. Bennie Lawrence and the bridegroom is the son of Mr. and Mrs. Hubert Brown. Rev. Bob Lynch, pastor of Central Baptist Church, performed the ceremony before a number of close friends and relatives. Mr. and Mrs. Bob Fegan of Progress attended the couple. Mrs. Marlon Stokes, niece of the bride, was ring bearer. Mr. and Mrs. Brown are residing at 121 James St.[xxii]

In August 1970 the Browns were in the society section of the newspaper when they attended a wedding.

This reporter joined Mr. and Mrs. Hubert Brown and some of Mrs. Brown’s relatives from Arkansas and Louisiana Saturday when all of these attended the marriage of Mr. Terry L. Brown and Miss Joyce O’Neal at Glade Baptist Church of Laurel Saturday night at 7:30.[xxiii]

Tylertown – Mrs. Freddie Smith Brown, 88, of Tylertown died April 21, 1988 in her home. Services were 2 p. m. today in Silver Springs Baptist Church in Walthall County, where she was a member, with the Rev. Joel Stroud officiating. Burial was in the church cemetery with Capps Funeral Home of Tylertown in charge of arrangements. Born Nov. 19, 1899, in Pike County, Mrs. Brown was the daughter of Denny and Cordelia Smith. The widow of Hubert Allen Brown, she was a homemaker. Survivors include three sons, Borden Brown, Lynn Brown and Hugh F. Brown, all of Progress; two daughters, Thiry Fegan and Peggy Alford, both of Tylertown; and nine grandchildren and seven great grandchildren.[xxvii]

Borden Brown, 74, of McComb. Died Feb. 27, 1995 at Southwest Mississippi Regional Medical Center. Visitation is 4-9 tonight at Hartman-Hughes Funeral Home of Tylertown. Services will be at 2 pm Wednesday in the funeral home Chapel, with the Rev. Harold Gartman and the Rev. Byron Wilkinson officiating. Burial will be in Silver Springs Cemetery. Mr. Brown was born Jan. 23, 1921, in Pike County. He was the son of the late Hubert Allen Brown and Freddie Beatrice Smith Brown. He was a retired construction worker and county employee. He was a World War II veteran and a member of Silver Springs Baptist Church. He is survived by a friend and companion, Barbara Gibson of McComb; two brothers, Lynn Brown and Hugh Brown, both of Osyka; and two sisters, Thiry Fegan and Peggy Alford, both of Tylertown.[xxviii]

Hugh F. ‘Duke’ Brown, 66, of Osyka, died April 4, 2000, at his residence. Services were 11 a. m. today at Hartman – Hughes Funeral Home in Tylertown. The Rev. Billy Ray Simmons officiated. Burial was at Centerville Cemetery in the Lexie community. Mr. Brown was born Dec. 17, 1933 in Pike County. He was the son of Hubert Allen and Freddie Beatrice Smith Brown. He was a veteran of the U. S. Navy and served during the Korean conflict. Survivors include one son, Elton Brown of the Osyka; one brother, Lynn H. Brown of the Progress Community; and two sisters, Thiry Fegan and Peggy Alford, both of Tylertown. Pallbearers were Alvin Alford, George Alford, Craig Brown, Wade Brown, Lynn Brown and Hugh Elton Brown. In lieu of flowers donations may be made to Silver Springs Baptist Church or a charity of choice.[xxix]

Lynn Holly Brown, 84, of Osyka, passed away Feb. 20, 2016 at Ashton Court in McComb. Visitation is 9 a. m. Thursday at Silver Springs Baptist Church until services there at 11, with Bro. Wayne Hall officiating. Burial will be in the church cemetery under the direction of Jones Family Funeral Services of McComb. Mr. Brown was born Jan. 22, 1932, in Progress, the son of Hubert and Freddie Smith Brown. He graduated from Progress High School in 1950. He served four years in the U. S. Navy during the Korean War. He was a member of the Silver Creek Masonic Lodge No. 410 for 50 years and was Past Master. He enjoyed farming and golfing, but mostly he enjoyed spending time with his children and grandchildren. He retired from MacMillan Bloedel. Mr. Brown was preceded in death by his parents; his wife, Beverly Thames Brown; a son Craig Brown; and three brothers, Fred Allen, Borden and Hugh (Duke) Brown. Survivors include his son, Wade Brown and wife Cindy of McComb; two daughters, Holly Brown and Carmen Davis and husband Stanton, all of McComb; two sisters, Thiry Fegan of Magnolia and Peggy Alford and husband George of Tylertown; 11 grandchildren, Christy Brown, Craig Brown, Keri Blades, Chris Brown, Damon Jones, Kassie Brown, Katie Brown, Clint Brown, Erik Jones, DeWayne Brown and Austin Brown, and 12 great – grandchildren.[xxx] 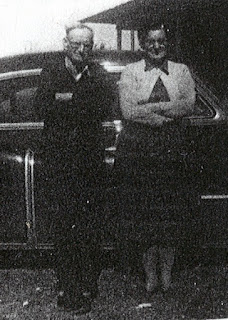 
Do you know more about Hubert?
Please reach out to me.