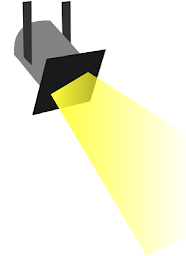 Thelma Laddie Brown,daughter of Jasper Pascal Brown and Rose Ella (Brumfield) Brown, was born 27 February 1908. She is a difficult person to research because of the various states she lived in and the various surnames she used. Her surname can be seen as Brown, Reynolds, Blakeney, Johnston or Nelson.
In 1920 Thelma, 11 years old, was living at home with her parents and her siblings in Pike County, Mississippi.[i]She ended her education after just two years in high school.[ii]By the time she was 17 years old she was a mother. Bernarr Jesse Reynolds was born 26 May 1925 in Pike County, Mississippi.[iii]Bernarr’s father was Donald H. Reynolds.[iv]
As a little boy, Bernarr lived with his maternal grandparents, Jasper Pascal Brown and Rose Ella (Brumfield) Brown. He was with them in Washington Parish, Louisiana in 1930. Thelma was not shown to be living with them.[v] 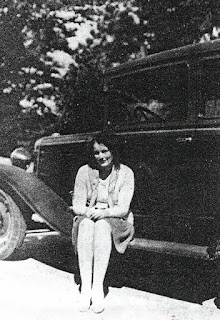 In 1935 Thelma was living in Creston, Ohio.[vi]Her brother, Roy Jessie Brown, was living there with his wife, Ivy Regina (Mark) Brown, and four children. Thelma may have stayed with them and she may have left her son with them. In 1936 Bernarr was living in Ohio. The 30 December 1936 McComb Daily Journal reported:

Thelma married George H. Blakeney on 7 February 1938 in Pike County.[viii]The marriage was very short lived. In March a notice was put in the newspaper summoning her to court in the case with George Henry Blakeney.[ix]In August the newspaper posted a notice saying George was not responsible for the debts “incurred by anyone other than myself.”[x]It sounds like they were no longer together. On 13 October 1938 this notice was printed in McComb’s newspaper:

Mrs. Thelma Blakeney who underwent a surgical operation at a local hospital yesterday, is reported as doing satisfactorily, much to the pleasure of her many friends.[xi]

In 1940 Thelma and her son were both living in Pike County, Mississippi, but they were not together. Bernarr was, once again, living with his grandparents, Jasper and Rose Brown. They were on Walker’s Ridge Road.  He was just 14 years old and his grandparents were in their seventies. The U. S. Census Report showed his surname as Brown rather than Reynolds.[xii]Thelma [using the surname Brown], 32 years old, was living in the Hotel Frest.[xiii]
Bernarr enlisted in the U. S. Army in February 1941. Like his mother, he had only two years of high school when he left school to enlist. A McComb, Mississippi newspaper reported recent recruits to Army, including “Bernarr J. R. Reynolds, son of Mrs. Thelma L. Reynolds, Indianapolis, Ind.” He enlisted at the McComb Recruiting Station and was sent to Fort Jackson, South Carolina to train with Field Artillery.[xiv],[xv]
Thelma went back to Ohio. On 17 July 1941 she married Lancelot M. Johnston in Sandusky, Ohio.[xvi]Lancelot was three years her senior. He was a “mariner”, having served in both the U. S. Navy and the Coast Guard. Thelma was a “manager” which can lead us to wonder if she worked in the hotel business. She traveled, lived in hotels and was a manager.[xvii],[xviii]Thelma’s marriage to Lancelot was brief. On 20 October 1945 he married again.[xix]
Later that year the United States became involved in World War II. Was Thelma worried about her son and his participation in the war as a soldier in the Army? It is difficult to know if they had a close relationship. They clearly did not live together often. Bernarr was promoted in 1944. Thelma was then living in Indianapolis, Indiana.

Bernarr J. Reynolds, son of Mrs. Thelma Laddie Reynolds, 20 ½ North Delaware street, was promoted recently from corporal to sergeant. He is in Europe.[xx]

Bernarr made it safely through the war. He was released from the Army 9 July 1945.[xxi]This notice appeared in an Indianapolis newspaper where Thelma was most likely still living.

Reynolds Back in U. S. Pfc Bernard [sic]J. Ryenolds, son of Mrs. Thelma Reynolds, Stubbin hotel, has won the ETO ribbon, the good conduct ribbon and the American defense ribbon for forty-three months of service with the 2d armored division. Pfc. Reynolds recently arrived at the Presque Isle Army airfield, Presque Isle, Me.[xxii]
When Bernarr returned to civilian life in July 1945, he went to Mississippi to visit his grandparents.

Bernard[sic]Reynolds has returned from overseas and is now visiting in the home of his grandparents, Mr. and Mrs. Jap Brown.[xxiii]
Thelma married again. She married Lucien Woodrow Nelson.[xxiv]She died in 1979 and is buried beside Lucien.[xxv]Bernarr Jesse Reynoldsdied 1 February 1995 in Mississippi.[xxvi]

B. J. Reynolds, 69, of Magnolia, died Feb. 1, 1995, at St. Dominic Hospital in Jackson. Visitation will be from noon Saturday at Hartman Funeral Home of McComb until services at 2 p.m. Saturday in the funeral home chapel, with the Rev. Byron Wilkinson officiating. Burial will be in Silver Creek Baptist Church Cemetery in Pike County. Mr. Reynolds was born in Hinds County [Pike Co.],the son of Thelma Nelson. He was a retired chef for an offshore catering company, Ocean Butler Inc. of New Orleans. He was a U. S. Army veteran of World War II and a member of Silver Springs Baptist Church. He is survived by two sons, Michael Reynolds, of New London, Conn., and Patrick Reynolds, of Lexington, Ky.; and one daughter, Becky Dickens of Bowling Green, Ky.; and one grandson, Jonathan Dickens of Bowling Green.[xxvii] 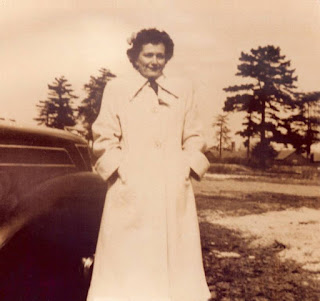