In searching for the military service record of Arnold Jasper Smith I discovered he had been killed in a “Collision of Cars” while on a train with his regiment. This seemed unusual and I guessed that a train disaster would have been reported in the newspapers. I checked Louisiana newspapers because the collision happened there and Mississippi newspapers because the regiment originated there. I found that newspapers in both states reported the incident.

In late February 1862 the 7thMS Regiment boarded a special 12-car passenger train. The soldiers had been in service for four or five months. Our family’s cousin, Arnold Jasper Smith, 21 years old, was onboard. A freight train carrying lumber to build gunboats was rushing in the opposite direction. That freight train smashed into the passenger train, hitting the car with the Dahlgren Rifles, of which A. J. Smith was a member. The engineer of the lumber train ran off into the woods. Many soldiers, relaxing on the train before going into battle, were killed or wounded. The following newspaper articles give details of the disaster.

Two of Arnold Jasper Smith’s brothers, Newton Oscar Smith and William J. M. Smith also served in Co. H of the 7thMS Regiment and must have been on the same train. They continued on with the regiment. Before the year ended, both were killed; William was killed at the Battle of Shiloh on 6 April 1862; and Newton died of typhoid fever on 4 May 1862. I cannot image the grief Wyatt and Euseba felt following the deaths of three of their sons. 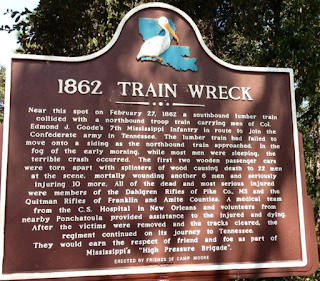 Historic Sign relates the tale of the Train Wreck. From:  http://www.campmoorela.com/Blank.html

Newspaper Article #1: This report from a New Orleans newspaper gives the earliest report of the accident that I could find. It is a bit confused. At first it tells us the conductor ran from the scene and later it says the engineer ran away.
The Accident of the Jackson Railroad – The first account of the casualties resulting from the collision of the trains on Jackson Railroad, yesterday morning, turns out to have been greatly exaggerated. Mr. Bruce, one of the attachés of the road, reports that the number of ascertained to have been killed was only twenty-eight, and twenty-two wounded.

Superintendent Williams, accompanied surgical assistance, repaired at once to the scene of the disaster.

The up train which met with that accident left the city at 4 o’clock, yesterday morning, with the 7thMississippi regiment, Col. Goode, which arrived here the day before on their way to Corinth. This regiment was formed of the following companies:

The Dahlgren Rifles, the Quitman Rifles and the Franklin Beauregards, were in the cars smashed by the down train, and of course the number of victims was most considerable among them. Here, so far as we could ascertain, the names of the killed and wounded:

Of the Quitman Rifles, eighteen were killed and several wounded. Lieut. Wilson, in command, was killed; so were Marion Freeman, two of the Whittingtons, and four others whose names are not known.

Four of the Franklin Beauregards, whose names are not known, were also among the killed.

There were eight more who were so badly wounded that they could not get their names and they were sent to the C. S. Hospital on Common street.

Wm. White, fireman of the up-town train, was slightly wounded. Andrew Fitzpatrick, conductor of the same train, has his arm broken and his hip dislocated. Many others were slightly wounded and have gone on with their command.

Foster, the engineer of the down train, made his escape through the woods.

Some of the wounded were brought to this city yesterday afternoon and sent to the C. S. Hospital on Common street. They presented a most heart-rending sight. Three of them died on their way from the place of accident, and some others are past all recovery. 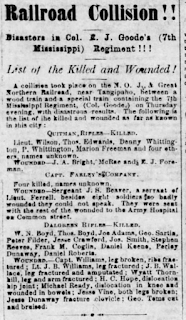 A collision took place on the N. O. J. & Great Northern Railroad, near Tangipaho, between a wood train and a special train containing the 7thMississippi Regiment, (Col. Goode) on Thursday evening with disastrous results. The following is the list of the killed and wounded as far as know in this city.

Capt. Farley’s Company – Four killed, names unknown. – Wounded – Sergeant J. S. Beaver; a servant of Lieut. Ferrell; besides eight soldiers so badly wounded they could not speak. They were sent with the rest of the wounded to the Army Hospital on Common street.

Newspaper Article #3: There were more newspapers than these three but no new information was included in the other reports.
The Disaster on the Jackson R. Road

Elsewhere we insert the list of the casualties produced by the heart-rending disaster on the Jackson Road, near Tchoupatoulas, on Thursday last. The up-train, we learn from the Delta, consisted of a locomotive, tender and twelve passenger cars, carrying the entire 7thMississippi Regiment, Col. Goode; and the down-train was of lumber, for gunboats now being built in New Orleans.

It seems that the down-train was running out of time, and the engineer, Foster, was notified of the danger of collision. As soon as the disaster occurred, Foster took to the woods and made his escape. These facts furnish very good evidence of his intentional guilt. His case must be investigated, and if he is ever caught, and it appears that the terrible disaster was attributable to either intention or carelessness, he should be swing higher than Haman.

These brave men have been in the service four or five months, ready and anxious to peril their lives in defense of the country and it is an unpardonable outrage to make them the passive victims of the carelessness of Rail Road employees. It is sad to think that a considerable portion of them should be mangled just at a time when they were slated at the prospect of reaching the scene of actual battle.

Besides the wounded mentioned there were between fifty and sixty, who were so badly injured as to be unfit for military duty, but who had their wounds dressed and kept on with the regiment. Dr. Bowie, surgeon of the regiment, came down to the city with the wounded.

Dr. G. W. Deveron, Superintendent of the Army Hospital on Common street, happened to be on the down train, and rendered the most valuable services to the wounded men by his surgical skill.