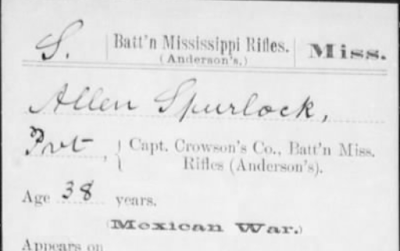 These brothers were mustered into service in October 1848 in Liberty, Mississippi when Allen was 38 and James was 27. They served under Captain Crowson in Anderson’s Rifles, Mississippi Battalion. James Spurlock was killed on 25 February 1848 in Mexico. His brother continued to serve for four more months. Allen Spurlock was mustered out 28 June 1848.

Source: Compiled Service Records of Volunteer Soldiers Who Served During the Mexican War from the State of Mississippi, NARA; digital image, Fold3 (fold3.com: accessed May 2022).