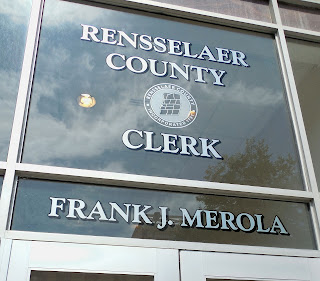 Stepping into the main office we signed in and were led down to the basement to a small room that had ancient record books stacked around the walls, a small wood desk and a couple chairs. We were allowed to browse to our heart’s content without any restrictions. No white gloves, no ‘pencils only’ restrictions, nothing. We also had no guidance and discovered where thing were by just pulling ancient volumes off the shelves and looking through them.

The first thing we wanted to examine was the immigration records. The website said we would find Naturalization & Petition Certificates and Declarations of Intent, both 1844 – 1949. We found those in large red binders with the pages in plastic sleeves and a modified index in each volume. The handwritten index had a page for each letter of the alphabet where names were listed randomly.
We happily found two of my friend’s ancestors in the Volumes of ‘Alien Declarations.’ Both made their declarations in 1868. We searched for the Letters of Intent next. The usual rules of genealogy research stepped in here. There were volumes of records from the early 1800s till 1850 and from 1900 onwards. Naturally, the years we wanted were missing.

Next we looked through marriage records. The internet had told us there were several volumes of a marriage index for the years 1908 – 1935 and marriage books. I had listed three marriages that fell in that time period in the county. These marriage books were originals with no protective sleeves. We found my friends grand parents’ marriage records and a great aunt’s marriage record. The details on the marriage record gave my friend new information on her great grandmother, her maiden name.

The internet had also told me census records were located in the basement room of the clerk’s office. I didn’t think we would take the time to look at those. I had searched for US Census records & New York State census records on line already. However, we were delighted to discover that Rensselaer County had conducted its own census every five years! We found her family in 1855 & 1875 with a list of family members full of useful information!

When we emerged from the basement we were pleased with our findings. I was glad to know that my county clerk’s office has those research gems in its basement. If you haven’t been to your local offices, check them out with a good friend and enjoy your day!

Posted by Colleen G. Brown Pasquale at 8:29 AM