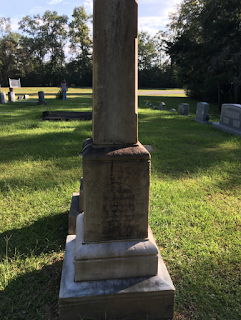 The death of this good lady has caused many to mourn. She was born in Washington parish, La., and has numerous relatives in that State, also in Texas, who will regret that she is no more, while the grief of those at home, more closely connected with her by the ties of kindred and friendship, is indeed poignant.

She was a noble Christian woman and her place will be hard to fill in the community in which she lived, as well in the home life of which she was the centre.

The bereaved husband, Mr. H. S. Brumfield, is one of the best known men in this portion of the State, having held the office of treasurer of Pike county for sixteen successive years, and his popularity is coextensive with his acquaintance. Of the fourteen children born to them, thirteen are living, seven of whom are married. To these, as well as the grandchildren and other relatives, the Gazette extends sincere sympathy, coupled with a hope that they may all meet again on the blisstal shore of Eternity.