This family suffered tragedy twice in the same year. Ira's father had died in January.

We have mentioned few deaths in the Herald with sorrow so deep as we feel in the announcement of the death of Ira Brumfield, which occurred on last Monday morning at the residence of his mother, in Liberty, at the age of 19 years. He passed away just as he had entered the threshold at a time of manhood, and at a time of life when hope is highest and future aspirations most indulged, but in all to be disappointed; earthly hope and aspiration all wrecked and gone, hence the deep sadness and sorrow felt for this young man, now numbered with the dead. His stay in this community was very short, yet long enough to make many friends, who will grieve for him and long cherish a fond remembrance of past pleasures shared with him while here. Our sympathy goes out to is weeping mother and family to its fullest extent. They have indeed felt sorrow within the last few months that does not fall to the lot of many in so short a period of time. We can only say, may a kind Providence enable to bear up under these great bereavements. 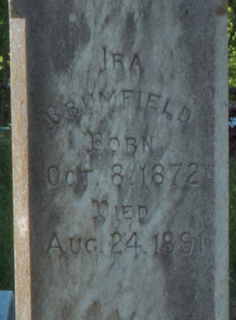