I have been researching the 1918 Influenza Pandemic and its presence in the lives of my grandparents. You can read about my maternal grandparents in New York City and my paternal grandmother in Ohio. It has been surprising to me that there is so little information about that Pandemic. I have books on the history of the counties/states where my grandparents lived and none of them mention the Pandemic. I have a book, ‘The Uncertainty of Everyday Life, 1915 – 1945’ by Harvey Green which has only a couple paragraphs on the topic. A Google search gave me limited information. Reading 1918 newspapers from Newspapers.com has been helpful. I hope we leave more information about our present Pandemic for future generations than 1918 has left for us.

My paternal grandfather, Roy Jesse Brown, was 16 years old when the 1918 Influenza Pandemic hit Mississippi. He was living in Pike County, Mississippi with his parents, Jasper Pascal Brown and Rose Ella (Brumfield) Brown, and attending school. He had lived in rural Mississippi all his life, one of nine children.

The Spanish flu pandemic of 1918, the deadliest in history, infected an estimated 500 million people worldwide—about one-third of the planet’s population—and killed an estimated 20 million to 50 million victims, including some 675,000 Americans. The 1918 flu was first observed in Europe, the United States and parts of Asia before swiftly spreading around the world. At the time, there were no effective drugs or vaccines to treat this killer flu strain. Citizens were ordered to wear masks, schools, theaters and businesses were shuttered and bodies piled up in makeshift morgues before the virus ended its deadly global march.[1]

Roy’s father was a farmer. Roy and his brothers most likely had many chores to do on the farm: feeding stock; turning large animals into the pasture; cleaning stables and pig pens; plowing, planting and harvesting; and more.[2]A healthy family was needed to keep the farm running smoothly and to keep the family fed. When the schools closed Roy and his brothers were mostly likely kept busy on the farm. Family stories say that besides running his farm, Jasper Pascal Brown ran a mill. Faye Seward Smith said Jasper, “was a mill wright in a paper mill.” Roy must have worked at the mill with his father, learning a skill he would use throughout his life. 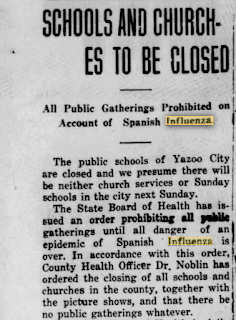 On 10 October 1918 The McComb City Enterprise Journal reported about 400 cases of Influenza in McComb City and the surrounding area in Pike County. The county’s Health Officer issued an order to close all public and private schools, churches and theatres in the county. He also banned all public gatherings due to the rapid spread of the “Spanish Influenza.” Doctors were told to report all new cases to the health officer. The next day the Yazoo Herald newspaper reported that the Mississippi State Board of Health  “issued an order prohibiting all public gatherings until all danger of an epidemic of Spanish Influenza is over.” 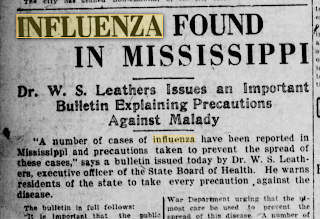 On 26 October 1918, the Enterprise Journal, a local paper for the Brown family, called the Influenza a “Malady”. It said “a number of cases” had been reported in Mississippi and residents of the state should “take every precaution against the disease”.

The 1 November 1918 Vicksburg Evening Post advised people to feed Influenza patients: milk, a soft boiled egg, some toast or crackers, a bit of jelly or jam, some cooked cereal like oatmeal, hominy or rice. The article in the newspaper also advised that a doctor should be called in case of a fever or difficulty in breathing.

The flu took a heavy human toll, wiping out entire families and leaving countless widows and orphans in its wake. Funeral parlors were overwhelmed and bodies piled up. Many people had to dig graves for their own family members. The flu was also detrimental to the economy. In the United States, businesses were forced to shut down because so many employees were sick. Basic services such as mail delivery and garbage collection were hindered due to flu-stricken workers. In some places there weren’t enough farm workers to harvest crops.[3]
Our Brown family may have contracted the Influenza but they had no deaths in Roy’s immediate family from the Pandemic. When Roy was older he moved to Ohio where he met and married my grandmother. I was just a toddler when Roy Jesse Brown died so I had no opportunity to hear any stories from him about the Influenza Pandemic.
[1]Spanish Flu. History; digital article (history.com: accessed April 2020).
[2][2]Green, Harvey. The Uncertainty of Everyday Life, 1915 – 1945 (Fayetteville, AR: The University of Arkansas Press, 2000) 43 – 45.
[3]Spanish Flu. History; digital article (history.com: accessed April 2020).
Posted by Colleen G. Brown Pasquale at 1:00 AM