Daniel Mullane and Brigid English were elusive when my daughter and I walked the streets of Clonmel. Looking for genealogical evidence of their lives there was even more elusive. I was not as prepared as I should have been.


Back in Dublin, the gentleman at the National Archives of Ireland suggested I visit the South Tipperary Archives at Carigeen Business Park in Clonmel. They would have voter’s lists and burial registers. After much driving around and asking for directions we did find the archives. However, they are open by appointment only and I was unable to make a connection with the archivist to make an appointment.


We were there, in the town my family had lived in for one hundred years but I was not connecting with them.


We drove northwest to Cashel. In the past I had emailed the Bru Boru Cultural Center at the Rock of Cashel. I knew they had a wealth of information and decided to visit in person to see what else I could learn. When we arrived we found a building with a shop for Irish souvenirs. When I asked about the genealogy center, rather than pointing me to a record room of some kind, Diedre was sent for. I had emailed her in past years and it was nice to meet her in person but I soon discovered that, once again, I was not prepared. The Cultural Center was not a place where patrons can search records. Diedre said they had nothing more than I already knew about the Mullanes. She did disappear to see if she could find out where the Mullane tombstone is located but was unable to find that out.


I was discouraged. I had hoped to see the tombstone for Daniel Mullane & Brigid English. It was one of my primary goals for my trip. I’ve seen it in old black and white family movies but I do not know what cemetery it is in, despite many attempts to find it. Before the trip I had written to the churches in Clonmel, contacted owners of Clonmel websites and searched the Family History Library in Salt Lake City for information on Clonmel cemeteries. I had hoped to visit the stone and leave flowers and a prayer.


While we were in Cashel my daughter and I walked up the sizeable hill to see the Rock of Cashel, also known as St. Patrick’s Rock, once the home of the High Kings of Munster. Most of the buildings date from the 12th and 13th centuries. It is a spectacular sight: the massive ruins, the view of the valley below and the enduring Celtic crosses standing in silent remembrance of days gone by.


There was one more place I wanted to visit, Cobh, once called Queenstown. Between 1848 and 1950 two and a half million people emigrated from Ireland through the harbor in Cobh, heading to Canada, the United States and Australia. My great grandmother, Mary Josephine Mullane Coyle, was just one of my ancestors who left the green hills of Ireland from Cobh. She left in May 1885 and sailed for New York City where she would meet and marry Michael Coyle [who had left from the same harbour several days before her] and raise seven children.


I wanted to see the harbor and visit the small Heritage Center with its exhibit about emigration. I was expecting a quiet visit there. It was a good plan. We had not, however, planned on the 100th anniversary of the sailing of the Titanic. The last port of call for the Titanic was Cobh and when we arrived a festival was underway. The narrow streets were lined with parked cars with made driving almost impossible. The parked and passing cars were so close we had to turn in our side mirrors to avoid hitting them. The sidewalks were filled with people in Titanic T-shirts or even life jackets. There was live Celtic music in the waterside park. My daughter managed to park and we walked back towards the Heritage Center. Each shop window was decorated with Titanic posters or a clock, walking stick, piece of clothing or other antique that supposedly had a connection to the Titanic. Lines of people waited to go in the shops and pubs. We managed to get down the sidewalk to the Heritage Center. We did see the little exhibit about emigration but with all the clamour about Titanic it was difficult to get the feeling of a red haired, 18 year old Mary Jo leaving her family behind for an unknown future. 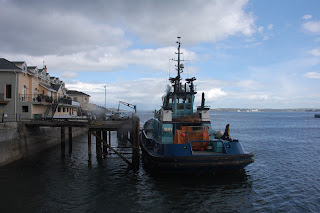 As we left the center, rain poured down and despite our rain gear we were drenched by the time we got back to our little rental car. We put Cobh and the Mullane side of the family behind us and headed for the Blarney Castle Hotel where we spent a delightful evening.
Posted by Colleen G. Brown Pasquale at 7:23 AM