Happy St. Patrick's Day!
It is the perfect day to post about my Irish great grandfather; a man whose life is surrounded with questions.

Although I do not know details of Michael’s death I do know something about his birth. Michael Coyle was the oldest child of Patrick Coyle & Margaret Brady. He was born in Moat, Cavan, Ireland.[1] He was baptized on 26 November.[2] He would be the oldest of 11 children. His siblings were: Bernard, Catherine, Maria, Patrick, Margaret, Thomas, James, Bridget, Maryanne & William.

For unknown reasons Michael did not stay in Ireland long. He was only 14 years old when he boarded the boat Servia and sailed for New York City, landing on 11 May 1885.[3] He became an American citizen in October 1894.[4],[5]

In New York City, Michael Coyle met Mary Josephine Mullane, daughter of Daniel Mullane and Brigid English, while they were both in a boarding house. She was walking down a flight of stairs and he was starting up those stairs. She thought he was very handsome. He saw her and instantly fell in love.[6] Despite the protests of Michael’s mother, they were married on 9 November, 1895 by Father Patrick F. McSweeny, the pastor at Saint Brigid’s Church.

On 2 June 1900 a Federal Census taker visited the little Coyle family at their home at 159 113th Street in Manhattan. The enumerator listed Michael as a baker in a bake shop. Mary Jo was listed as a mother of three children; two living. Their daughters were listed as Nellie and Mary. [7] In 1910 they were renting an apartment on Third Avenue. Michael was still working as a baker. Mary Jo was the mother of five; four living.[8]

Michael was proud of his American citizenship. He kept his naturalization papers in a safe deposit box in a bank. He was also proud of his Irish birth. Each year on St. Patrick’s Day he would open the windows on their apartment, play Irish songs on their piano and sing loudly. Mary Jo would complain at the noise. Michael would say, 'I want people to know we are Irish'. His wife would say, 'I think they know already'.[9]

The 1920 Census is important in the history of the Coyle family because it is the only census to show the whole family: Michael, Mary Jo and their six living children, ages 23 to 3 years old. Michael was still a baker.[10] By the 1925 NYS census their oldest daughter was married.[11]

By the end of 1927 Mary Jo had died, Michael had left his family and the single daughters were living together. I have been unable to discover where Michael went or when he died.


Interested in Irish research? Check the long list of resources at my web site,
Our Leaves & Branches. 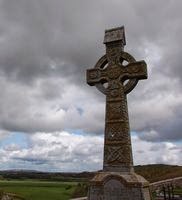