Arlie was the husband of Lyda Mearl Brown, my great aunt. Lyda was the mother of the children named in this obituary. Lyda died in 1979. She is not mentioned in this obituary but it does reveal that he had a second wife. 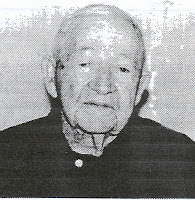 Tylertown. Arlie Wesley Pierce, 96, of Tylertown, died March 7, 1993 at Seventh Ward General Hospital in Hammond, La. Services were 1 pm today in Hartman-Hughes Funeral Home Chapel. The Rev. A. J. Lovas and the Rev. Carl Case officiated. Burial was in Tylertown Cemetery. Mr. Pierce was born Jan. 27, 1897 in Old Pike County. He was the son of Eddie Wesley Pierce and Alice Lenoir Brock Pierce. He was a farmer. He is survived by his wife, Lexie Mae Thompson Pierce of Kentwood, La.; two sons, E. J. Pierce of Tylertown and Malcolm Pierce of Mobile, Ala.; three daughters, Iris Brock of Chickasaw, Ala., Wesley Leissinger of Metairie, La., and Betty Jane Pierce of Tylertown; one sister, WIlda Smith of Tylertown, eight grandchildren and 10 great grandchildren and four great- great grandchildren. 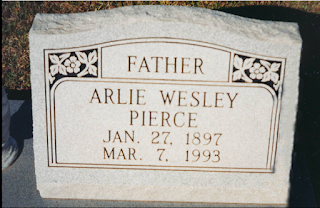