Philip and others in our Gruissy family used Creasy as their surnames. According ot my paternal grandmother, they wanted to sound more ‘American’. Philip married Mary Wasem 8 March 1888 in Ohio. They lived in the Beach City area. Their son was Harry Lewis Creasy, b 10 May 1891. Family members told me he ran a grocery and census reports supported that. Those reports show Philip as a grocer [1900 Beach City], as a salesman in a grocery store [1910 Beach City] or as the proprietor of grocery store [1920 Beach City].

My great aunt, Wava Alice (Mark) Braun gave me a photo of Philip and his grocery store. Signs in the window read, “Grocery”, “Notions” and “Creasy”. My great aunt said he also sold home made medicines. 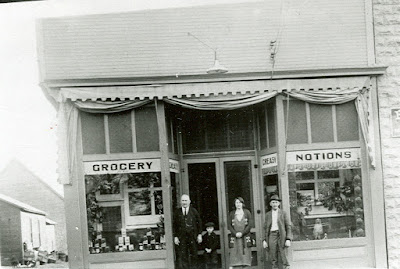 I decided to search Newspapers.com to see if Philip had advertised in the local newspapers. I did not find any advertisements but I did find a report of a robbery at his store and his obituary which mentions his store.

Beach City, Aug 24. – Burglars early Sunday morning broke into the Standard Oil filling station and the Philip Creasy grocery. Entrance was gained by breaking open transoms. Nothing was taken from the gasoline filling station but $10 in change and a strong box were stolen from the grocery store. The strong box was found Sunday a short distance from the store. It had not been opened.

The funeral will be held Monday at 2 p.m. at the U. B. church, Beach City. The Rev. Ira Swezey will officiate. Interment will be made in the Beach City cemetery.