I have recently been inspired to revisit the Gruissy/Creasy branches of my family. This is due to the influence of Carole Morrison Moser & Sharon Leber Ambrose. We share Augustus Ceaser Gruissy as our 2nd great grandfather. Augustus had three wives. These wonderful cousins are descendants of his first wife, Mary Ann Everett Gruissy & I am a descendant of his second wife, Esther Barbara Wolf Gruissy. Carole recently discovered my blog & website and contacted me. We have been sharing & comparing since then. Carole sent these fabulous photographs & I found the obituary at Newspapers.com. Working together with cousins makes the research even more fun! 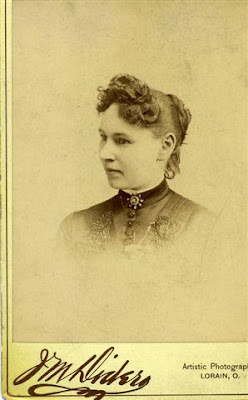 Mrs. Albert Lutz Dies in Findlay. Word was received Wednesday of the death of Mr. Albert Lutz, aged 51, wife of “AJ” Lutz, which occurred at Sheppard Sanitarium, Findlay, O., at 5:30 o’clock Tuesday evening, July 10th. Mrs. Lutz had been in poor health for a number of years, which necessitated Mr. Lutz giving up his restaurant business, which he conducted for a number of years at White Front. After seeing out Mr. and Mrs. Lutz went to St. Petersburg, Fla., and have spent some time at Chippewa Lake and Canton since their return, Mrs. Lutz being treated at the later place for cancer. Mrs. Lutz was born near Leroy and spent the greater portion of her life in Medina County. Besides her husband she leaves a sister, Mrs. P. J. Moore [Caroline L. Gruissy Moore] at Chippewa Lake and another sister in Wadsworth. [Mary had three other sisters. Margaret Jane Gruissy Morrison was a full sister. Two half sisters were Rephenia Cathern Gruissy Nichols and N. Regina V. Gruissy Mark.] She was an aunt of Mrs. Art Young of Medina and Mrs. John Canavan of Lakewood.

The body was shipped to Medina and taken to the home of her sister at Chippewa Lake. Funeral services will be held from the Methodist Church at 1:30 o’clock today (Friday), Rev. Phillip Kelser, officiating. Interment will be made in Spring Grove cemetery. 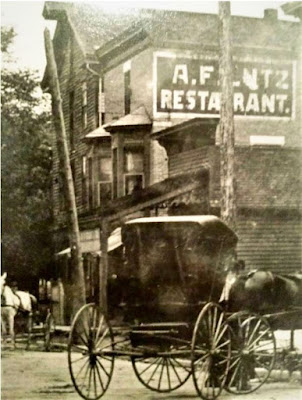 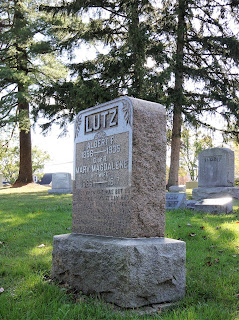 Photo from FindAGrave, Memorial #69873001
Spring Grove Cemetery, Medina, Ohio
Note: I wish I could read the inscription on this tombstone.

Research is more fun when you work with a cousin on the line.

Yes! Charlie, you are right!

I can't imagine what it would have been like to have cancer or to live and die in a sanitarium in the 1910s. There was probably no help for cancer yet in those days. Poor Mary -- and so many others during that time period.

It's great to have cousins find your blog who are also interested in genealogy!