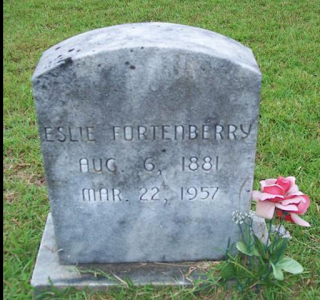 Funeral services for William Easlie Fortenberry, Pike county farmer, were conducted from the Chapel of the Ginn Funeral Home Sunday afternoon at 2. Mr. Fortenberry died Friday at his home in McComb. He was 76.

The Reverend Herman Hays, McComb, Reverend Truly Reynolds and Reverend Enos Branch, Tylertown, officiated at the final rites for Mr. Fortenberry, and interment was in the Fortenberry Family cemetery.

Mr. Fortenberry was born August 6, 1880 in Old Pike County, the son of Jesse and Susan Ryals Fortenberry. He married Fortenberry who preceded him in death by several years. Mr. Fortenberry had lived in this county until six years ago when he moved to McComb.

He is also survived by 12 grandchildren and 8 great grandchildren. Funeral arrangements were conducted by Ginn of Tylertown.

Note: The year of William's birth on the tombstone does not agree with the obituary.